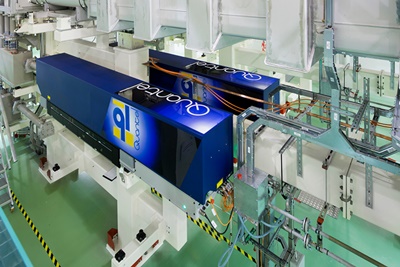 Marc Le Flohic, founder of the fiber laser company Keopsys, has taken over as the CEO and chairman of fellow French laser firm Quantel, following a shareholder buy-out.

Le Flohic replaces long-time Quantel chief Alain de Salaberry, with the latter staying on in an advisory capacity but standing down from his executive position.

Holding companies
Confirmation of the CEO switch comes a month after Esira, a holding company chaired by Le Flohic that owns the Keopsys Group, acquired a substantial shareholding in Quantel via a €5 million buy-out of Eurodyne - which until then had been under de Salaberry’s control.

Following that deal, Le Flohic says that he plans to “develop synergies and collaboration” between Keopsys and Quantel, as part of an effort to establish a global photonics player in France.

“Both [the] Quantel and Keopsys [groups] have built up expertise in very closely related technologies and market product ranges that complement together perfectly,” Le Flohic said.

“I am delighted with this future collaboration, which will enable [us] to support the Quantel Group’s growth over the coming years, aiming to develop a world leader for optronics and photonics, bringing together most of the laser technologies that exist today, such as semiconductor lasers, solid-state lasers, dye lasers and fiber lasers.”

Under de Salaberry’s watch, Quantel has grown with the acquisition of US-based Big Sky Lasers in 1998, and Nuvonyx Europe and Wavelight Aesthetic in 2007. Listed on the Paris stock exchange since 1997, Quantel posted sales of €62 million in 2015.

The company has also established strong connections with the French military, and supplied key lasers for the high-profile Laser Mégajoule project near Bordeaux that is aiming to create inertial confinement fusion conditions for nuclear weapons science and - potentially - future energy applications.

Profitability focus
In comparison, Keopsys – set up by Le Flohic in 1997 (as "OptoComm Innovation"), in the “Photonics Bretagne” cluster region at Lannion – now employs 100 people and posted a net income of €2.2 million on its 2015 sales of €16.2 million.

De Salaberry said of the switch and plan to align the two groups more closely: “I am very pleased with this operation, which will enable the Quantel Group to maintain a stable major shareholding structure around Marc Le Flohic, a talented business leader who has successfully and quickly developed his group in the laser sector thanks to his determination, his scientific relevance and his professionalism.”

The boardroom changes will also see the departure of Quantel supervisory board members Christian Moretti, Patrick Schoenahl and Ghislain du Jeu, with the board of directors shrinking from eight members to six as a result.

Le Flohic added that his initial focus will be to further strengthen profitability – Quantel posted a net profit of €2.1 million on its 2015 sales of €62 million – while simplifying the company structure, which currently features numerous subsidiaries and divisions.

Before founding Keopsys, Le Flohic studied at Rennes and Toronto universities before joining US-based Pritel, where as an R&D engineer he worked on lasers, amplifiers and other photonic components.