Also planning to sell off its non-strategic Compute business within 100 days. 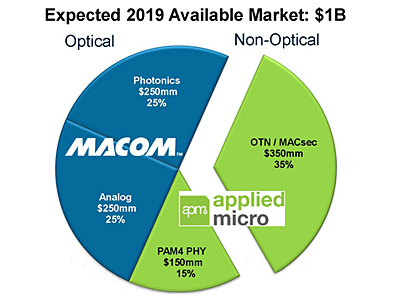 Connectivity to boost Macom's addressable market by $500million in 2019.

Macom is paying the equivalent of $8.36 per share (in a part cash, part share deal), valuing Applied Micro at $770 million. The payment consists of $3.25 in cash and 0.11 Macom shares per share of AppliedMicro acquired.

This deal represented a 15% premium over the target company’s closing price of $7.25 on November 18th. Macom said it also intends to divest its non-strategic Compute business within the first 100 days of closing.

Commenting on the transaction, John Croteau, Macom’s President and Chief Executive Officer, said, "This transaction will accelerate and expand our breakout opportunity in enterprise and Cloud data centers. We will now be able to provide all the requisite semiconductor content for optical networks – analog, photonic and PHY – from the switch to fiber for long haul, metro, access, backhaul and Data Center sectors.

"AppliedMicro’s 100G to 400G single-lambda PAM4 platform should perfectly complement our leadership in analog and photonic components for data centers.”

Paramesh Gopi, President and CEO, AppliedMicro, commented, “We are pleased to be joining forces with Macom. The transaction provides a strong path forward for our connectivity business while delivering AppliedMicro stockholders a robust premium.”

The boards of directors of both companies have already approved the transaction, which is expected to be accretive to Macom’s gross and operating margins and earnings per share as soon as 2017 (all non-GAAP values). When the deal is completed, expected in the first calendar quarter of 2017, AppliedMicro stockholders will own around 15% of the combined company. 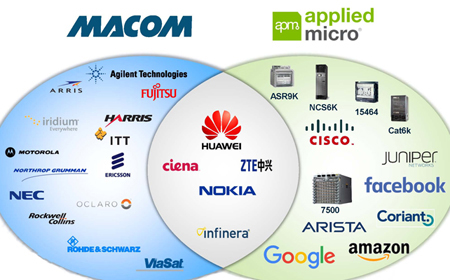 Combination strengthens relationships with market leaders and expands the customer base.

In the analysts conference associated with the announcement of the acquisition, John Croteau, President and CEO of MACOM explained why this is a good deal: “Everybody throughout the industry is seeing that breakout in 100G optical connectivity within the data centers. Macom has already established a lead position, which is by our estimate a 60% plus share of CDRs, TIAs, laser drivers, VCSEL drivers.

“We've now announced the lasers and silicon photonics, L-PICs and so on, that will be rolling out in the springtime. So that is a breakout growth opportunity that has already begun driving growth. Combining forces with AppliedMicro, puts us in a fabulous position to deepen and broaden the penetration of our analog and photonic portfolio into those cloud service providers, the cloud data centers as well as enterprise data centers. So it's a fabulous opportunity here.”