Agreement on US uranium stockpile could see billion-dollar facility built in Paducah, Kentucky - if investors to back the project are found. 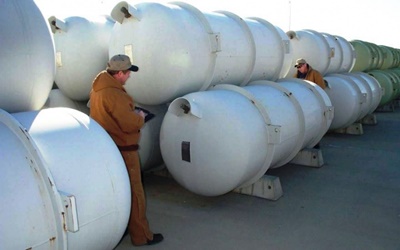 The US Department of Energy (DOE) has agreed to sell a stockpile of depleted uranium to a company specializing in laser enrichment of the nuclear fuel, in a deal that may result in a large new separation facility being built in Paducah, Kentucky, within a decade.

According to the various parties involved, construction of the anticipated billion-dollar facility could take place in the early 2020s, depending on further regulatory approvals, financing, and the assumption that market demand for the uranium is sufficiently strong.

Silex Systems, the Australian company that is developing the laser enrichment technology, says the DOE approval provides for the sale and purchase of around 300,000 metric tons of so-called depleted uranium “tails” that could be converted back into uranium hexafluoride with natural levels of the fissile 235U isotope.

‘Pivotal’ step
Responding to the DOE announcement, Silex’s CEO Michael Goldsworthy said: “The finalization of the agreement with the DOE is a pivotal step on the path to commercialization for our unique third-generation laser enrichment technology.

“We look forward to working with the many stakeholders involved to make this opportunity become a commercial reality over the next few years. In particular, we are enthusiastic about engaging with the local Paducah and Kentucky workforces to bring our cutting-edge laser enrichment technology to the traditional heartland of the US enrichment industry, and helping to restore US leadership in nuclear technology.”

Technically, the DOE’s uranium sales agreement was signed with the US company Global Laser Enrichment (GLE), a joint venture involving engineering giants GE and Hitachi, and Canada-based uranium producer Cameco. GLE had previously signed up as a licensee of Silex.

However, the market for uranium has been in the doldrums ever since the Fukushima disaster and the decision by Germany to turn its back on nuclear energy, with the material now selling close to record low prices. In April this year, that prompted GE and Hitachi to sell their combined 76 per cent share in GLE to Silex and a party of new investors that the company is yet to sign up.

China’s nuclear expansion
The Australian firm points to a forecast by the US Energy Information Administration (EIA) as evidence of a growing market for nuclear power. While the EIA predicts that nuclear capacity in Europe and the Americas will flat-line over the next two decades, it also expects a sharp expansion in China and India.

Responsible for generating 11 per cent of global electricity, there are currently 448 “operable” nuclear reactors around the world, with 58 new power plants under construction and a further 167 at the planning stage.

Silex says that such figures confirm the long-term need for uranium enrichment, which has historically been achieved with large centrifuge systems.

The laser separation technique works on the principle that output wavelengths can be tuned precisely to the different absorption lines of uranium compounds featuring different isotopes of the radioactive element.

Some of those absorption lines are close to the output wavelengths of carbon dioxide lasers, which can be adapted to resonate with one isotope or another and so initiate the separation process.

The laser separation idea is not a new one - in fact it goes back decades - but it has never been commercialized. That is partly because of fears that the enrichment technology could get into the hands of hostile regimes. And because laser enrichment facilities could be built at much smaller sizes than conventional centrifuge plants, any proliferation of the technique would be more difficult to police.

Laser enrichment
Expected to be significantly cheaper than centrifuge separation, the laser approach can be applied to “re-enrich” the depleted uranium tails from DOE stockpiles that have built up over several decades. These stockpiles are thought to contain 0.2-0.5 per cent 235U, the fissile isotope.

Silex says that around two-thirds of these tails would be converted into even more depleted uranium (<0.15 per cent 235U) using the laser technique, with the remaining third at the 0.7 per cent 235U level found in natural uranium.

That recycled uranium could then be sold back into the market, before undergoing further re-enrichment to reach the much higher 235U concentrations needed by nuclear reactors (around 5 per cent 235U).

The key challenge for Silex at the moment appears to be securing the finance required to fully develop and scale the laser technology for the Paducah project. Only a small company, it needs to sign up some major investors to back the plan – potentially attracting them via the DOE’s loan guarantee program.

At the moment, it says that several interested parties are at various stages of due diligence, and expects to complete the restructure of GLE with new investment in late 2017.