Company presents a prototype of a multi-channel laser for scanning LIDAR at Electronica in Munich, this week. 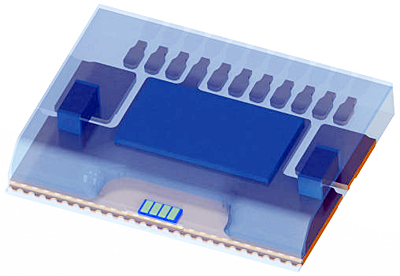 Osram Opto Semiconductors has developed a new four-channel laser that it says “takes LIDAR systems for autonomous driving a step closer”. The laser system is this week making its public debut at the giant industry expo Electronica 2016, in Munich, Germany, (Hall A3, Booth 107).

This development is expected to be used for the first time in scanning LIDAR sensors themselves based on micro-electromechanical systems (MEMS). Such solutions do not require a mechanism to direct the laser beam so they are less susceptible to wear and tear. Together with Innoluce, an Infineon Technologies company and specialist in laser-scanner technology, the partners say they are presenting “the future of what LIDAR systems will look like”.

Scanning LIDAR systems scan a car’s surroundings horizontally with a laser beam across a certain angular segment and produce a high-resolution 3D map of the environment. In most cases, the laser beams in current scanning LIDAR systems are deflected by means of mechanical moving mirrors. Some solutions make use of several laser diodes mounted on top of each other to extend the vertical field of view.

Osram’s new 4-channel LIDAR laser consists of a laser bar with four individually-controllable laser diodes and an integrated control circuit. The entire module is surface-mountable, which reduces assembly costs and the time needed for fine adjustment. 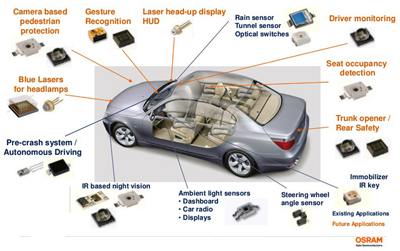 To create the laser bar four laser diodes are manufactured beside one another in a single production step, ensuring they are precisely aligned while they can still be individually controlled. Sebastian Bauer, product manager, commented, “The four laser diodes are separated in the production process but they are not individual diodes. The result is a laser that emits four perfectly parallel beams. Consequently, customers don’t have to spend time laboriously adjusting the individual light sources.”

For the new laser, Osram has improved its pulse laser diodes with a wavelength of 905nm. The nanostack laser diodes deliver a maximum optical output of 85W at 30A, which is approximately 10 W higher than was previously possible.

The pulse length of less than 5ns is also much shorter than the previous figure of 20ns. Osram says that the short pulse length and the small duty cycle of 0.01% mean that, even at high outputs, the requirements of the relevant eye safety standards are satisfied. With an operating voltage of 24V, the laser also meets the requirements for use in vehicles. The Innoluce-developed MEMS chip, measures 2.7x2.3mm2 and runs at up to 2kHz.

Pulsed laser diodes from Osram have been in use in cars for more than ten years – such as in adaptive cruise control systems and for emergency brake assist systems. Samples of the new 4-channel LIDAR laser will be available from the early summer of 2017, with full market launch planned for 2018.

A new infrared LED (IRLED) from Osram reduces the size of lighting units designed for camera-based assistance systems in cars. Compared to the company's previous Platinum Dragon, the Synios SFH 4770S A01, “offers 25% higher optical output and needs only about one tenth of the footprint,” the company claims. 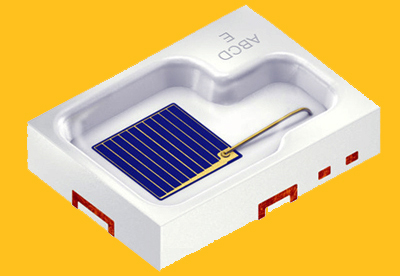 Osram presented its first Synios IRLED for the consumer market, the SFH 4770S, in 2015. Now the updated component is suitable for use in vehicles. The main applications for this 850nm IRLED are in lighting units for camera systems that monitor the outside environment of the car.

Applications include night vision assistants and forward collision detection systems, such as pedestrian protection solutions that work with camera images. Flooding the scene in front of the vehicle with infrared light enables a vehicle's environment to be reliably detected in the dark or in poor weather.

The new IRLED delivers an optical output of almost 1,200 mW from a current of 1A and is therefore around a quarter brighter than the Platinum Dragon SFH 4235. “The SFH 4770S A01 currently offers the best efficiency and the best ratio between component size and optical output on the market for the automotive sector,” said Dr. Walter Rothmund, Head of Marketing Infrared Automotive at Osram Opto Semiconductors.