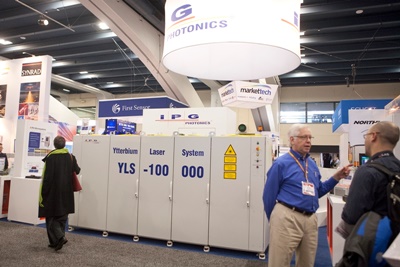 Annual sales at IPG Photonics are closing in on $1 billion, after the market-leading provider of high-power fiber lasers reported record figures for the third quarter of 2016.

At $266 million, those revenues were up 9 per cent on the same quarter in 2015, driven to a large extent by a 17 per cent boom in sales of high-power lasers used in materials processing applications.

And while the last three months of the calendar year often shows a seasonal slowdown, IPG’s CEO and founder Valentin Gapontsev indicated that this was unlikely to be the case this year, saying:

“We are seeing strong momentum in our business as we enter the final quarter of our fiscal year.”

Rebound in Japan
Gapontsev and his executive team are predicting that fourth-quarter sales will come in at between $255 million and $270 million. With revenues totalling $726 million so far this year, a modest overperformance between now and the new year could tip IPG to its first $1 billion annual turnover.

In any case, the continued strong growth at IPG means that its yearly sales will be close to Trumpf’s latest fiscal-year posting of €935 million – the ongoing volatility in foreign exchange rates notwithstanding.

Gapontsev told investors that there was plenty more scope for growth, too. “We have significant opportunities to expand our business through both existing and new OEMs and end-users as we develop innovative products to address applications beyond our core markets,” he said.

Speaking in an investor call alongside IPG’s CFO Tim Mammen, Gapontsev reported particularly strong recent demand out of Japan, where the key machine tool sector is emerging from a two-year slump, and Italy.

IPG is also benefiting from a more diversified customer base in China, while fears at the start of the year that the company would face stronger competition from rival fiber laser developers have so far proved unfounded – with average selling prices (ASPs) holding up well as a result. If that situation continues, IPG’s very strong increases in unit sales will start translating more directly to higher sales.

3D printing and electric cars
While fiber laser applications remain largely dominated by cutting and welding applications, a shift towards using kilowatt-scale sources in laser additive manufacturing of metal parts has seen IPG’s sales to this sector rise around 20 per cent in the year so far.

With the likes of GE expecting that kind of growth rate for the emerging market to be maintained over the next ten years – provided that faster additive manufacturing can be achieved while maintaining good resolution – IPG’s prospects look strong.

Commenting on the important automotive sector, where IPG’s lasers are already used in lots of welding applications, Gapontsev suggested that the widespread re-tooling required to produce electric vehicles would present a significant opportunity for laser vendors.

At Elon Musk’s Tesla, that opportunity could be imminent: the electric car and battery pioneer is expected to invest heavily in its Model 3 production line in Silicon Valley during the closing quarter of the year.

Digital cinema
Meanwhile IPG’s new multi-laser luminaire for cinema projection and other large-scale displays appears to be impressing, with Mammen saying that OEM evaluations of the technology are “progressing well”, and Gapontsev predicting that significant shipments of the extremely high brightness system will emerge within a couple of quarters.

Looking longer term, the CEO said that IPG was set to become a major player in the medical sector, where the introduction of fiber sources would represent something of a revolution in a market still used to much older generations of lasers.

The medical market is inevitably a slow-moving one, with extensive clinical evaluations of any new equipment typically taking years. But Gapontsev reckons that within 3-5 years the medical field could be responsible for a significant chunk of IPG sales, as new procedures based on fiber lasers emerge.

• Markets reacted positively to IPG’s higher-than-expected quarterly profits of $69.2 million, pushing the Oxford, Massachusetts, company’s stock price up 10 per cent in early trading on October 27. At around $93 on the Nasdaq exchange, IPG’s market capitalization currently stands just shy of $5 billion.