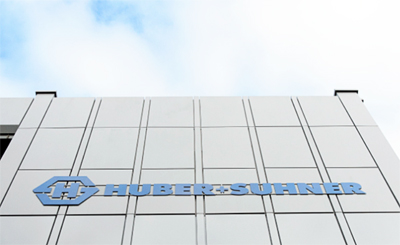 Huber+Suhner has made three significant acquisitions in recent years.

In June, 2016, the company bought Polatis, a US and UK-based optical connector specialist – an acquisition that followed the November 2014 buyout of Cube Optics, a WDM-focused German company and the 2012 acquisition of US-based RF company Astrolab.

H+S’s financial report stated the following: “The business volume generated by the recently-acquired business units Astrolab and Cube Optics have continued at a high level. Our latest acquisition, Polatis, which is active in the field of optical switching, recorded a marked increase in order intake and attracted reference orders from potential large-scale customers. This confirms the growing demand in the target markets. The company's main focus over the coming months is on expansion of production capacities.

H+S reported that overall business volume in the third quarter was “slightly below the average recorded in the first half year”; Q3 order intake was CHF 179.4m (€165.5m) and net sales CHF 177.6m (€163.8m). Besides seasonal effects, the company stated that “sizeable investments in telecommunication infrastructure in India represented an important growth factor during the first quarter”. 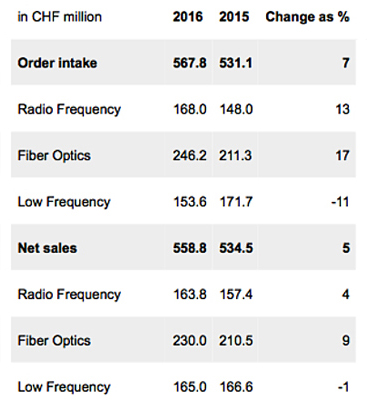 However, the India roll-outs were suspended in the third quarter, leading to a temporarily lower business volume in the communication market. Implementation of these large-scale projects is likely to be resumed during the fourth quarter.

In addition, H+S stated, “the situation in the railway market continues to be restrained; the expected orders in China have been further delayed. Nevertheless, the signals from that market indicate a revival in the fourth quarter in this area, as well”.

Despite what the company referred to as “the project interruption of the LTE roll-outs in India”, it has reported growth in net sales of 9%, and a 17% boost in order intake. The Fiber Optics division is therefore continuing the positive trend recorded in the first half year. The Radio Frequency division also continued its positive development during Q3. In the first nine months of 2016, this division generated an increase of 13% in order intake and 4% in net sales over 2015’s equivalent.

However, in the first three quarters, the Low Frequency division maintained the net sales level at just under that of the previous year but recorded a significantly lower order intake due to what the company called “the situation in the railway market”. Net sales remained 1% lower than in the previous year and order intake dropped by 11%.

Taking into account the project delays in India and China, the company said it anticipates growth in net sales for 2016 as a whole of around 5% compared with the previous year – assuming that the currency situation remains unchanged. The continuing low business volume in the railway market and the preliminary investment for rapid expansion of the production capacity of Polatis will temporarily somewhat subdue the earnings situation in the second term. For 2016 overall, the company “anticipates an EBIT margin at the upper end of the medium-term target range of 6 to 9%”.