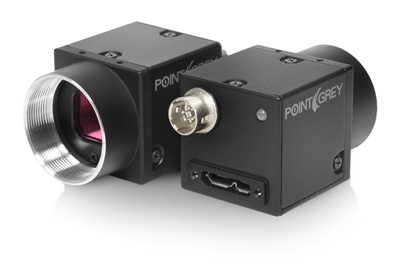 Point Grey Research, the developer of high-performance scientific and industrial cameras, is set to become part of the ever-growing FLIR Systems empire by the end of the year, after the two firms agreed a $253 million acquisition.

Point Grey’s latest technology will be on view at the forthcoming Vision 2016 trade show taking place in Stuttgart, Germany, next month. The company, still based in Richmond, British Columbia, where it was set up nearly 20 years ago, will be showcasing its new 20 megapixel “Blackfly S” camera at the event.

Representing its highest-resolution offering to date, the Blackfly S is based around a Sony “Exmor” CMOS imaging sensor, and is said to be no larger than an ice cube. Point Grey is aiming the new device at a wide range of applications across science, medicine and industry.

The Point Grey deal is the latest in a series of acquisitions by FLIR, which has for some time been pursuing a diversification strategy to augment its historic strength in defense and homeland security applications, which are more susceptible to the fluctuating spending patterns of governments on their military operations.

Other recent deals have included the 2015 purchase of New Jersey based surveillance software and hardware firm DVTEL, and the June 2016 acquisition of San Francisco’s Armasight, which sells rifle scopes, spotting scopes, binoculars, goggles, and illuminating tools into both military and consumer markets.

FLIR has also set up a strategic collaboration with China-headquartered drone specialist DJI Innovations that should see large numbers of unmanned aerial vehicles kitted out with infrared imaging capability.

Earlier this year FLIR executives described the growth in commercial applications of thermal imaging as “explosive”, with deployments in agriculture, building inspection, search and rescue, and firefighting all expected to help the company grow its business.

In its latest financial results, posted in July, FLIR reported pre-tax earnings of $115 million on sales of $782 million for the first six months of the year. Although that represented a lower profitability compared with the first half of 2015, the company pointed out that this partly resulted from the costs of an internal ramp of low-cost optics capability designed to improve profitability in the longer term.

Aside from the Richmond headquarters, Point Grey lists offices in Ludwigsburg, Germany, as well as in Tokyo, Beijing, and Trento in Italy. The firm’s 300 employees are currently said to produce more than 200,000 cameras every year.