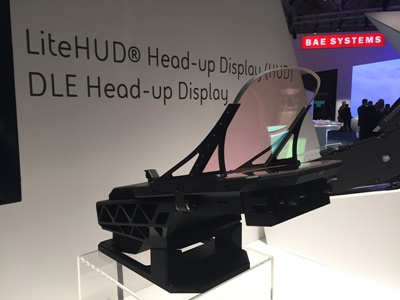 Coupled with a recent £230,000 grant that is helping finance the installation of a new ion-beam assisted deposition coating chamber, it should see headcount rise from the current 29 employees to an anticipated 60 by the end of the decade.

The deal with BAE Systems, which will see Artemis provide combiner assemblies that feature in the defense giant’s “LiteHUD” head-up displays, runs through 2026. Artemis originally announced the supply agreement in June, but has only just revealed that BAE Systems is the customer.

Nick Hurst, the executive chairman at Artemis, said when the deal was first signed: “This order encapsulates our strategy to be world leaders in this area and positions the company well for predicted strong continued growth in the HUD market.”

Hurst added that the company’s work on HUD combiners had been growing, particularly over the past year. “We have one of the highest on-time delivery rates in the industry, exceeding 90 per cent,” he noted, along with a near-perfect customer acceptance rate. “The quality of our manufactured products, as well as our service makes us world-class and at the very high end of the photonics sector.”

Absorbing data
The advanced optical assembles for the HUDs enable pilots to see and absorb critical data without being distracted from their main view out of the cockpit.

The company said: “Artemis Optical’s coatings maximize clarity without the need for pilots to change focus as the symbology is fixed at infinity, appearing to ‘float’ on the horizon. This maximizes pilot performance and aircraft safety.”

Aside from the specifics of the BAE work, the agreement is evidence that Artemis’ strategy of moving up the value chain to supply assemblies rather than just components, and thus deal directly with major contractors, is bearing fruit.

The company is now expecting to employ additional personnel in the form of coating technicians, assembly staff and project managers at its 25,000 square foot factory in Plymouth to support the agreement, which it is believed will see thousands of units shipped.

Artemis’ sales director Jamie Pindard commented: “BAE Systems is a very prestigious partner and a world leader in the design of HUD systems. Supplying the assembly, not just the coated glass, underlines our position as a leading international manufacturer of HUD combiners. Our strategy is to be global leaders in this area.”