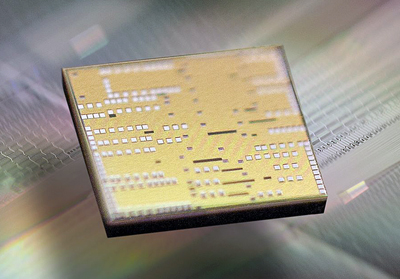 The company received a cash prize of €4,000, a business coaching package worth €1,500, and various promotions in industry journals. In the competition, which is part of the European outreach program Photonics4All, each of the eight finalists from Germany, France and Austria had to give a presentation on their technology and business model to a judging panel comprising photonics company leaders and cluster managers.

The startup, a Technical University of Berlin spin-off based on nine years’ continuous research into silicon photonics, develops fully-integrated Si-photonics transceiver chips that are designed for server interconnects in data centers. Sicoya said it is on track to enter the market in 2017 with a 100 Gbit/s transceiver chip featuring integrated electronics and optics on a single chip.

When still based at TU Berlin, the now 25-strong company raised €4.9 million of public funding. Dr. Torsten Fiegler, Sicoya’s business development manager said, “The grants SiliconLight, Silimod, eXIST Forschungstransfer and SPEED have been crucial in our achieving major breakthroughs in technology development. In 2015 we closed a Series A financing round of €3.5 million with Target Partners.” 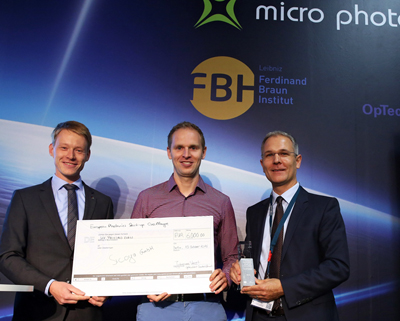 Startup winner: Sicoya and friends at Micro Photonics in Berlin.

“Due to our technological achievements, we can lower the power consumption and reduce the costs of silicon photonics transceivers tremendously. This enables better interconnects and will enable a faster internet.”

Waldemar Jantz, a partner at Target Partners and now a board member at Sicoya, commented “Sicoya represents an outstanding opportunity to invest in one of the worldwide leading activities in integrated photonics. We are very proud to be able to support the company in what we believe will be a major step towards the next generation of high-performance integrated photonics.”

More than 1000 participants from 15 countries attended the first edition of the new trade fair and congress, which ran from 11–13 October. The conference took place alongside the displays of some 80 exhibitors representing micro-optics, microsystem technology and optoelectronics. The next edition of this business and networking event is scheduled for autumn 2017.