Global enthusiasm for proposal to establish “International Day” as legacy of IYL 2015. 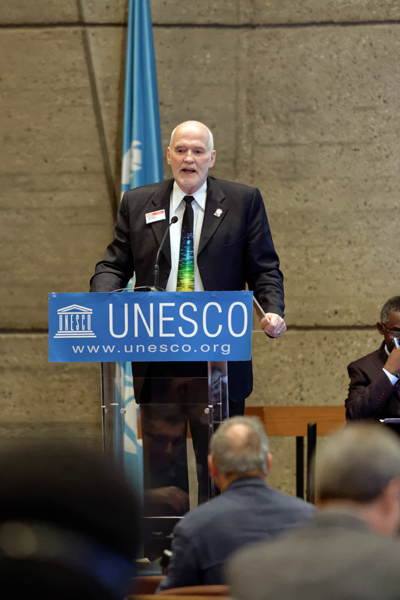 Leaders of SPIE, the international society for optics and photonics (and publisher of optics.org), have welcomed the support expressed by UNESCO, the United Nations Educational, Scientific and Cultural Organization, for a proposal to establish an annual “International Day of Light”. The event would serve as an enduring legacy of the International Year of Light and Light-based Technologies 2015, of which SPIE was a Founding Partner.

John Dudley, Steering Committee Chair of IYL 2015 and Jean-Paul Ngome Abiaga, Assistant Programme Specialist in UNESCO’s International Basic Sciences Programme, this week announced that the Executive Board of UNESCO has endorsed a proposal for an enduring follow-up to IYL 2015 in the form of an annual event. The celebration would be held on May 16 every year, starting from 2018, marking the anniversary of the first successful firing of a laser in 1960.

In increasing awareness of the extraordinary role of light in all our lives, said SPIE CEO Eugene Arthurs, “the UN-declared IYL 2015 observance made many of us more aware of widespread inequities such as light poverty, the many people with no access to even simple spectacles, and the uneven access across the world to the light-powered internet for education and commerce.”

Benefits of IYL 2015 were seen around the world.

“Establishing the International Day of Light will provide an annual reminder of the progress of photonics-enabled technologies,” Arthurs added. “It will help us inspire more talented young people to take up careers in the field, to fulfil the enormous potential, of which the IYL gave us a glimpse. And we can judge ourselves by how much progress we have made in bringing the gifts of light to all humankind.”

Lieberman emphasized the broad reach that illustrates the “tremendous success of the IYL 2015 observance in stimulating global awareness of the wonders and capabilities of modern optics and photonics.”

“SPIE’s members, joining others, reached millions of people in more than 147 countries, sharing a message of hope, and a sense of wonder, that resonated around the world,” he noted. “More and more people now understand that, from lasers to spectacles, from microscopes to telescopes, and from machines that make computer chips to systems that weld rocket ships, our field is changing things for the better. SPIE is delighted at this opportunity to expand upon and reinforce this important message every year.”

The International Day of Light proposal was introduced by sponsors Ghana, Mexico, New Zealand and the Russian Federation and examined by the UNESCO Executive Board during its 200th Session in Paris, between October 4-18.

The purpose of an International Day of Light will be to provide an annual focal point for the continued appreciation of the central role that light plays in the lives of the citizens of the world in areas of science, culture, education, sustainable development, and in fields as diverse as medicine, communications and energy, Dudley and Ngome Abiaga said in their announcement.

As with IYL 2015, they noted, the broad theme of light will allow many different sectors of society to participate in activities around the world that will raise awareness of science and technology, as well as art and culture and their importance in achieving the goals of UNESCO in promoting education, equality and peace.

The first International Day of Light celebration is planned for May 16, 2018 following its official Proclamation at the General Conference of UNESCO in November 2017.

The Final Report of IYL 2015 was delivered to UNESCO in Paris during a special half-day meeting on October 3 and also presented to the United Nations Second Committee in New York on October 18.