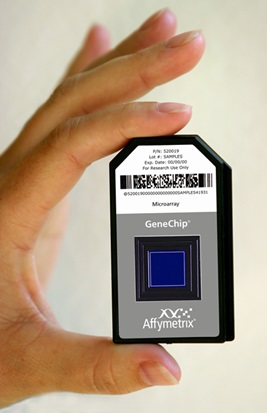 Affymetrix, the California-headquartered developer of genetic analysis equipment based around fluorescence detection, is set to become part of the giant Thermo Fisher Scientific group of companies.

Massachusetts-based Thermo Fisher’s board of directors approved a $14-per-share cash acquisition of Affymetrix late last week, valuing the deal at $1.3 billion. That represented close to a 50 per cent premium on the company’s stock price, which immediately rose in value by the same degree.

Affymetrix sells a wide range of equipment used to analyze cells, proteins and genes, with Thermo Fisher keen to exploit a rapidly growing opportunity in flow cytometry. Affymetrix has posted a net loss in each of its last two fiscal years, on annual revenues of just over $300 million, but Thermo Fisher says that the acquisition will add to its profitability immediately.

That is due in part to what the companies describe as the “synergies” created by the acquisition. The deal will inevitably result in some consolidation, and Thermo Fisher estimates that cost savings of $55 million will be made by eliminating overlapping activities. Assuming that it is approved by Affymetrix shareholders, the acquisition should close in the first half of this year.

Laser-induced fluorescence
The analytical equipment offered by Affymetrix draws on a number of different technologies, one of which is the fluorescent labelling of antibodies. That technique is deployed in flow cytometry, now routinely used in basic and clinical research. Specific applications include immunology, cell biology, and stem cell biology, as well as diagnosis of blood cancers and HIV.

Affymetrix claims to be the number-two global provider of flow reagents that are used in cytometry research applications.

The company has also developed novel glass array “chips” that are fabricated with photolithography techniques similar to those widely used in volume semiconductor device production.

According to the Santa Clara firm, that technology makes it possible to synthesize a large variety of pre-determined DNA sequences simultaneously in known locations on the glass chip.

The lithography stage creates exposure patterns on the “GeneChip” array that are able to direct chemical reactions and provide rapid DNA analysis. “Our technology allows millions of probe sequences to be arrayed at specified locations on a chip the size of a thumb nail,” states Affymetrix in its most recent annual report. “Our arrays permit analysis of all the genes or RNAs contained in a cell or tissue simultaneously.”

It means that DNA or RNA in the form of a blood or saliva sample, or a biopsy, amplified and prepared for hybridization, can be analyzed quickly.

Cancer diagnosis is one of those key markets, and this week has seen a number of significant new initiatives relating to that. They include a $100 million effort funded by the San Diego gene sequencing equipment specialist Illumina, venture capital firm ARCH Venture Partners, and Bill Gates among others.

They are joining forces to set up “GRAIL” a new company that will be dedicated to developing a “pan-cancer” screening test by measuring the circulation of nucleic acids in blood that can indicate the presence of a tumor.

Illumina CEO and GRAIL chairman Jay Flatley said: “We hope today is a turning point in the war on cancer. By enabling the early detection of cancer in asymptomatic individuals through a simple blood screen, we aim to massively decrease cancer mortality by detecting the disease at a curable stage.”

Illumina’s sequencing technology, which also relies on fluorescence markers and detection, can be used to detect the nucleic acid biomarkers that can indicate cancer in patients who are otherwise symptomless.

Meanwhile, some of the biggest names in the US pharma industry are establishing the National Immunotherapy Coalition, described as a “Moonshot” for cancer treatment. Under the “QUILT (Quantitative Integrative Lifelong Trial)” program, they will test new combinations of cancer treatment options on an anticipated 20,000 patients before the end of the decade.

“The mission of the Cancer MoonShot 2020 Program is to rapidly enrol and complete randomized Phase 2 clinical trials to validate the potential of panomic (whole genome, transcriptome and proteomic) analyses and to evaluate novel combination immunotherapies as the next-generation standard of care,” state the partners.