Defense contractor to deliver 35 kits to the US and Qatar for better night vision and longer-range target acquisition. 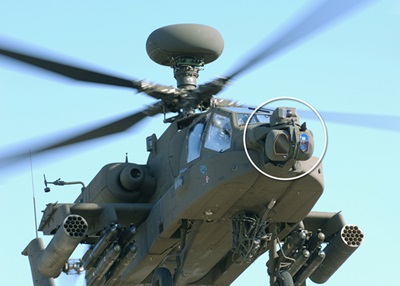 Lockheed Martin has landed a $54 million contract to upgrade US and Qatari helicopters with enhanced night vision and laser target acquisition technology.

Part of a total contract worth $131 million, the deal centers on Lockheed’s Modernized Target Acquisition Designation Sight/Pilot Night Vision Sensor (M-TADS/PNVS) for the AH-64E Apache helicopter. In the defense contractor's words, the upgrade will “bring color to the cockpit for the first time”.

More specifically, Lockheed is to produce 35 M-DSA kits and spares for the US Army and the Qatar Emiri Air Force, at its Orlando and Ocala facilities in Florida, over the course of the next three years.

Weapons range extended
The upgrade, which provides higher-resolution night vision, a new laser pointer marker, and an eye-safe multi-mode laser, should enable pilots to identify targets from a longer distance than is otherwise possible.

They will also have the ability to view high-resolution, near-infrared and color imagery on cockpit displays, says Lockheed.

According to the firm, the advanced electro-optical fire control system was first fielded in 2005. Since then Lockheed has delivered more than 1350 of the systems to a combination of the US military and international forces.

Matt Hoffman, the Lockheed director responsible for the equipment, said in a company announcement: “These enhancements enable faster situational understanding for aircrews and more accurate coordination with ground troops.”

He added: “With the Apache expected to be in service through 2045, we’re continuing to invest in sensor upgrades, such as the M-DSA, to ensure aircrews have the capabilities they need to address emerging threats.”

Aside from these latest Apache upgrades, Lockheed is also in the process of making 860 Modernized Laser Rangefinder Designator (M-LRFD) kits under another $22 million M-DSA contract awarded last August.