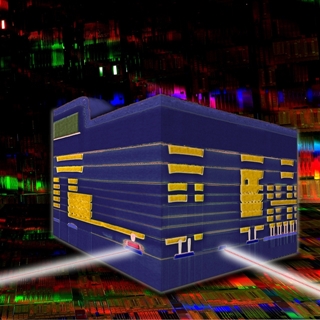 by Ford Burkhart in Tucson
A $3 million research collaboration involving several US, Northern Ireland and Republic of Ireland institutions will seek to improve optical integrated chip technology for use in data centers.

Scientists at the University of Arizona (UA) in Tucson said the goal is improving the agility of high-bandwidth optical connections that support high-capacity cloud applications.

In Ireland, the two main partners are the Irish Photonics Integration Center (IPIC) and the new CONNECT Center based at Trinity College, Dublin. CONNECT is Ireland's national research hub for Future Networks and Communications. Co-funded via the European Regional Development Fund, it unites ten academic institutions and 38 companies to work on broadband architectures, cellular technologies and the Internet of Things.

In Northern Ireland, the main partner is the Computer Science Research Institute (CSRI), located north of Belfast. The CSRI was established in 2004 to help attract research funding.

The US end of the project includes a partnership with the Center for Integrated Access Networks (CIAN), an National Science Foundation-backed engineering research center in Tucson, Arizona.

The project is jointly funded by the NSF, the Science Foundation of Ireland in the Republic of Ireland, and the Department for Employment and Learning in Northern Ireland.

Packaging focus
Nasser Peyghambarian, a UA professor of optical sciences, is CIAN director and principal investigator for the US part. He said, “This effort will complement CIAN activity in silicon photonics integration by allowing us to focus on packaging of the photonic chips that our foundry partner Sandia National Labs has been providing.”

He added that the tri-nation project is driven by the increasing popularity of cloud computing and data analytics by large corporations including airlines and major pharmaceuticals and ICT firms, as well as by governments.

Peyghambarian and colleagues will employ optoelectronic chips to create affordable network connections within and between high-capacity data centers so that they can cope with vast amounts of data.

Integration of optics and electronics on the same chip supports more data traffic with substantially lower power consumption and cost. These packaged optoelectronic chips are intended to make the fiber-optic “fat pipes” of the internet more intelligent and cost-effective, Peyghambarian said.

Among the key scientists involved are Gerard Parr from Ulster University and Liam Barry at Dublin City University, who are the principal investigators for the Northern Ireland and Ireland project elements respectively.

Keith Roper, NSF Engineering Research Center Program leader, said that the project is the first Center-to Center collaborative activity that is focused on research into the future of the internet.

Dominique Dagenais, the program manager for CIAN, said: “I am delighted that we were able to start this effort and focus on the manufacturing of optoelectronic chips for future optical communication networks.”

Complex connections
Peyghambarian said the project will seek to ramp up the volumes and drive down the cost of integrated optoelectronic devices. One of the main obstacles to realize cost-effective photonic chips, he said, is the complex packaging and assembly requirements.

Large switching chips can have hundreds or even thousands of both electrical and optical connections. One of the major activities of this project will be to bring together CIAN and IPIC expertise in silicon photonics to address these challenges.

Dan Kilper, another UA optical sciences professor who is involved at CIAN, said: “By bringing together four research centers with experts spanning devices to systems and applications, we can bridge the technology divide and take large steps toward a new, more scalable internet.”

Gerard Parr, the technical lead in Northern Ireland, added: “Our role in the project will be to explore innovative protocols at the software layer to enable the real-time management and optimization of photonic resources at the physical layer.”

Liam Barry said that the project “will allow researchers from the IPIC and CONNECT Centres in Ireland to form part of this internationally leading research team working on the development of agile photonic technologies for future inter and intra data center connections”.