But pioneer Google Glass no longer market leader as rivals Sony, ODG and others steal a march with devices for enterprise apps. 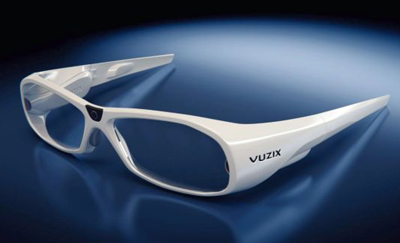 Vuzix is among the challengers to waning Google Glass.

Smart glasses, once exemplified by the original but failed Google Glass, are seeing a resurgence in developments and demand, but are now driven by enterprise rather than consumer applications. New players are topping Google in deploying smart glasses to provide "augmented reality" solutions for workers in factories, distribution centers, oilfields, and more, according to a new report by analyst Lux Research.

Lux identified at least 70 enterprise deployments for the increasingly powerful head-mounted displays. Most are still in pilot programs but use cases can broadly be classified into three core functions: accessing information, real-time communication, and documentation.

Accessing information in field of view is the most common user function, in which smart glass wearers can inspect and manage information such as checklists, product information, and notifications from various sources by viewing it in the headmounted display (HMD). Sometimes, the visualized information is overlaid on the real object of interest to achieve augmented reality (AR).

This approach, says Lux, is already used in such “penetrated” industries such asaerospace, logistics, manufacturing, medical and healthcare, power, and the restaurant and retail sectors. The main advantage for users is that by displaying information in the field of view with hands-free control, workers do not have to disrupt their hands-on tasks, saving time and improving productivity. The challenges identified include that displays sometimes are distracting and may block users’ view. 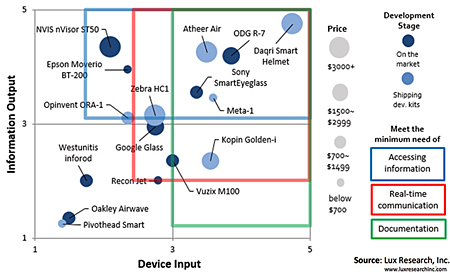 The enterprise market has become the major battlefield for smart glasses.

“As next-generation glasses such as Epson’s Moverio BT-2000 and Meta Pro emerge, we believe that this field will become even more competitive, ending a period of high premiums for hardware. Software and service will become the primary way to maintain margins,” commented Tony Sun, Lux Research Analyst and lead author of the report titled Better Than Google Glass: Finding the Right Smart Glasses for Enterprise.

“Apple’s impact on the market will also soon be visible, as it builds on the acquisition of Metaio, a leading augmented reality software developer,” Sun added. Apple’s May 2015 acquisition of Metaio, a German company whose technology combines real-world imagery and computer-generated elements into moving video presentations, was expected to shake up this sector that seemed to have stalled. At the time of the acquisition, Metaio's augmented-reality software was being used in diverse smartglass applications in retail, industrial and automotive markets.

Considering the 2015 acquisition, Steffen Sorrell, an analyst with technology market research firm Juniper Research, told Reuters that Apple could incorporate Metaio's intellectual property to differentiate its products, which could give Apple “a jump on rivals” who are working to develop augmented reality semiconductors but remain at least 18 to 24 months away from delivery, the analyst said.

Lux Research analysts evaluated over 70 enterprise deployments for augmented reality glasses, and compared leading products to identify the best for each use case. Among their findings:

Lux concluded, "Google Glass set the standard in smart glasses, but as the target market has shifted from consumer to industrial, the question became, 'should Google Glass still be the standard?' In researching this report, we have analyzed more than 70 enterprise deployments of smart glasses. In most cases, Google Glass came up short, with other smart glasses like Sony's SmartEyeglass and ODG's R-7 better suited to meet industrial requirements."