II-VI keen to get 'ahead of the curve' on VCSELs 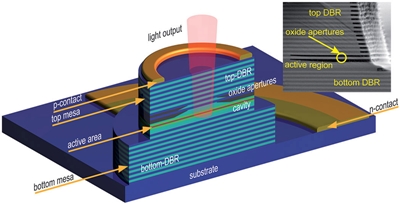 Shares in the diversified optics and photonics company II-VI have jumped in value by 15 per cent after its executives revealed a sharp rise in bookings at its photonics division and confidence of rapid growth in the market for VCSEL components.

Last week, II-VI said that was set to acquire both Anadigics and Epiworks, in a bid to expand its VCSEL manufacturing capacity and expertise and, in CEO Francis Kramer’s words, “invest ahead of the curve” for what the company believes will be a significant growth market.

And although Anadigics has since received a higher-value bid for the business, II-VI believes that it is still in a strong position to complete the acquisition.

Photonics bookings up 50%
For the three months that ended December 31, II-VI posted an 8 per cent increase in total sales to $191.5 million – with the firm’s photonics division up 22 per cent to $74.3 million.

But it was a sharp rise in bookings that appeared to drive the stock price upwards, with Kramer and colleagues reporting close to a 50 per cent jump in photonics division bookings, to $97.5 million.

That increase appears to be mostly driven by strong demand from the optical communications market, with the macroeconomic slowdown in China having little impact on the country's build-out of networks just yet.

“Despite sluggishness in China and in our industrial markets, we are very encouraged about the prospects ahead for all of our business segments,” Kramer said, while II-VI president Chuck Mattera noted that the Broadband China program was driving orders for 980 nm pump lasers and other key components.

“While the [photonics] bookings growth was driven by increased market demand, share gains and new product introductions, a good portion appears to be related to larger and additional long-term orders from customers becoming concerned about the supply chain constraints,” Mattera added.

On the industrial laser side, which II-VI reports as its “laser solutions” segment, Mattera said that the company now sees a 60/40 ratio in demand for fiber and carbon dioxide lasers, respectively.

Despite being a major supplier of carbon dioxide laser optics and battling against the strength of the US dollar, II-VI said that its revenues for the segment grew 4 per cent year-on-year.

“Our high-powered infrared optics sales were flat to down in our major markets for the quarter, as were our fiber laser cutting and welding heads for automotive manufacturing plants,” Mattera added. “This is due, we believe, to seasonal factors, as well as to the overall economic slowdown in China, even though the material processing market in China continues to be a growth area for us as we continue to find and grow new opportunities there.”

VCSEL boom anticipated
Responding to questions during an investor conference call to discuss those latest results, Kramer said that a rival bid to acquire the Anadigics business and with it a state-of-the-art VCSEL-manufacturing process on a 6-inch wafer platform had “some flaws”.

II-VI had announced a bid of $0.66 per share in cash (equivalent to around $61 million), before Anadigics said on January 25 that GaAs Labs and its affiliates had trumped that with a $0.76 per share cash offer.

However, Anadigics also said that the GaAs Labs proposal “does not presently contain all of the material provisions that the company's board of directors believes are necessary to protect the company (i.e. Anadigics) and its stockholders”. Financial and legal advisors are now working with Anadigics to iron out those issues and deem whether the latest deal does in fact represent a superior offer.

Kramer said in response: “The company selling that business [Anadigics] has the decision what they want to do [sic]. We are interested to win the business, but at the same time we should pay the right amount of money for it.”

What Kramer and his colleagues are anticipating is a surge in demand for VCSELs driven by both the current main market of data communications and new applications in consumer electronics. One of the key markets is expected to be gesture recognition, where Lumentum (previously JDSU’s commercial optics division) has enjoyed success with Microsoft and its Xbox Kinect consoles. Finisar is also targeting the emerging application set.

$2BN market by 2020?
Mattera said that channel checks by II-VI and forecasts from industry analysts agreed that VCSEL applications would grow “substantially” between now and 2020. “I think at least one recent market survey suggests that the market might be as large as $2 billion for these applications,” he added.

“It's an exciting, enabling technology, and we are very confident in the technology capability,” Mattera continued, pointing out that the interest from the market and the exact timing of the anticipated ramp depends to some degree on the capability of the supply chain. 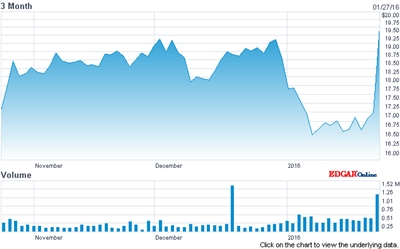 Moving to a 6-inch wafer manufacturing process ought to improve both VCSEL manufacturing capacity and device costs, with Mattera saying: “We see this as a chance for us to expand and to have a scalable expansion capacity to address those [VCSEL] markets and to be ready ahead of them - as opposed to trying to catch up.”

• The positive report and outlook from II-VI prompted a 15 per cent rise in the company’s stock price when markets opened shortly after the investor call. The stock closed on January 25 at $19.53, equivalent to a market capitalization of $1.2 billion.