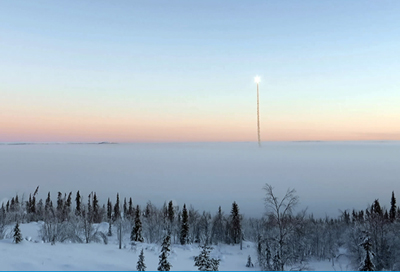 KALEXUS and FOKUS were conducted on Germany's TEXUS-53 rocket in microgravity.

According to Albert Einstein's theory of relativity from 1915, all bodies in a vacuum regardless of their properties are accelerated by the Earth's gravity at the same rate. Under the conditions of microgravity, very long and precise measurements can be carried out to determine whether different atoms of different mass would actually “fall equally fast”, as the theory predicts.

The theory has just been tested using precision measurements in space with “cold” atoms of potassium and rubidium. In preparation for the measurements, two experiments (one for each metal) were conducted at the same time onboard a sounding rocket launched from Kiruna, Sweden, on January 23. Preliminary analysis of the data shows that the project was successful.

The FOKUS experiment (Faserlaserbasierter Optischer Kammgenerator unter Schwerelosigkeit) successfully traveled to space and back on board the German Space Agency's (DLR) TEXUS 53 sounding rocket. On the rocket’s 20 minute journey, the payload reached an altitude of 253km and offered 6 minutes of microgravity time for scientific experiments.

The Humboldt Universität zu Berlin (HU) and the Ferdinand-Braun-Institut, Leibniz-Institut für Hoechstfre-quenztechnik (FBH) are using laser technologies in these gravity experiments within the framework of projects KALEXUS and FOKUS.

The Berlin researchers said of their experiment, “the demanding technology demonstrators lay the foundations for the precision tests of the equivalence principle with so-called potassium and rubidium atom interferometers as well as for further experiments aiming at tests of Einstein's theory of relativity. We are hoping that eventually these experiments will provide the information needed to address one of the greatest challenges of modern physics: The unification of gravity with three other fundamental interactions into one comprehensive theory.”

A stable laser system for the manipulation of potassium atoms was set up in the project KALEXUS under the guidance of the Optical Metrology group at HU. The centerpiece consists of two micro integrated semiconductor laser modules developed by FBH. In KALEXUS the wavelength of these laser modules is matched to an atomic transition of potassium. During the six-minute period of microgravity the experiment automatically stabilizes the wavelength of both lasers.

In addition, the laser system can autonomously switch back and forth between the laser sources during flight. After all, such experiments are not easy to repeat, and scientists cannot take corrective action during the flight. Moreover, the measurements may not be compromised if one of the lasers should fail. 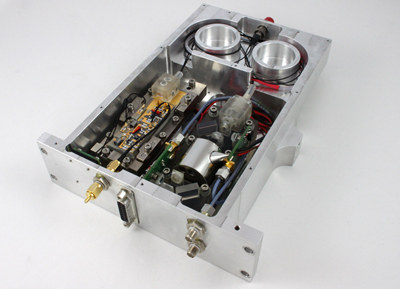 Another laser module designed by FBH and assembled by HU played an important part in the FOKUS campaign, which is managed by Menlo Systems. A laser was stabilized to an atomic transition of rubidium in order to demonstrate the technological maturity of corresponding technology for subsequent drop tests of atoms under microgravity conditions. The laser system also allows for clock comparisons.

The general theory of relativity presumes that the “ticking” of all clocks is affected by gravity in the same way, regardless of how these clocks are implemented physically and technically. An initial test in April 2015 confirmed the suitability of such "atomic clocks" and of the laser systems required to test the general theory of relativity in space. The goal is now to confirm the initial results after some technical improvements have been applied to the sys-tem.

The two experiments use different types of lasers from FBH. This allows a comparison of the different laser technologies for the application scenario. The centerpiece of the FOKUS module is a DFB (distributed feedback) laser, which emits light in a narrow wavelength range at 780 nm. This is one of the key requirements for the laser module, which is used for the spectroscopy of rubidium atoms and thus for precision measurements.

KALEXUS uses an ECDL concept (extended cavity diode laser), which with its external grating, provides an even narrower linewidth. The laser is optimized for spectroscopic measurements with potassium atoms and emits at 767 nm. However, the external grating makes it potentially more prone to malfunction compared with the monolithic structure of the FOKUS laser. Ultimately, the palm-sized modules have to withstand the mechanical loads during rocket launch with accelerations of up to 15 times the acceleration of gravity and have to function trouble-free in space. KALEXUS and FOCUS are financed by the German Center for Aerospace (DLR).