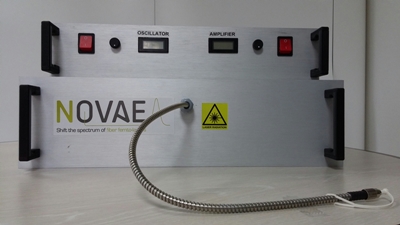 Novae, a France-based start-up specializing in femtosecond- and picosecond-pulsed fiber lasers emitting in the mid-infrared spectrum, has closed a €1 million round of venture finance.

Investors IRDInov, Dynalim and Finance Utile – all French – took part in the round, along with existing company shareholders and Limousin Business Angels. The funding is set to help the company move into industrial micromachining applications.

Limoges base
Founded in 2013 as a spin-out from the Xlim Institute at Limoges University, the company has since moved to a facility in Saint Martin le Vieux, close to the local airport.

The mid-infrared lasers it sells are based on technology initially developed at CNRS, as well as Limoges and Rouen University. The wavelength of the thulium-doped fiber sources could prove useful in a range of industrial micromachining and surgical applications, because of the stronger absorption of polymer material and some biological tissues around 2 µm.

The company, which emphasizes the reliability of its lasers, is also targeting scientific applications. At the forthcoming SPIE Photonics West exhibition in San Francisco, it is set to show off a new picosecond-pulsed laser producing a supercontinuum between 2 µm and 4 µm.

'Turning poiint'
Novae also says that it has already delivered femtosecond lasers to its initial clients in Europe, North America and Brazil. But Nicolas Ducros, the firm’s president, said that the €1 million round will prove to be a “turning point” in Novae’s development of industrial micromachining applications.

“Industrial companies in Germany and Japan have already expressed a strong interest for the potential of Novae’s technology,” he said. “[The] invested funds will allow the release of this potential through new application developments with technological and industrial partners, and the setup of a pilot industrial production line.”

Other members of the Novae team, for example R&D engineer Patrick Cadroas, bring experience from the Alphanov regional cluster around Bordeaux, and Amplitude Systèmes, another French company specializing in ultrafast fiber lasers.