A light source with sufficient stability to use as a reference for qualifying exoplanet exploratory CCD sensors. 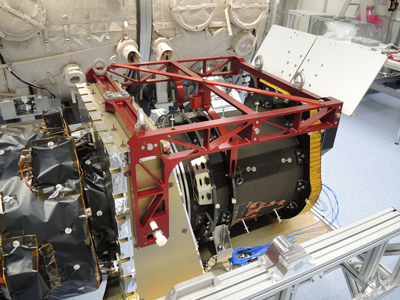 CHEOPS Satellite's Structural and Thermal model at the University of Bern.

In order to be able to detect planets comparable to Earth, the European Space Agency’s CHEOPS satellite (“CHaracterising ExOPlanet Satellite) CHaracterising ExOPlanet Satellite), which will be sent into orbit at the end of 2017, will need to be able to measure the luminosity of a star with previously unattainable accuracy. Therefore, during its development and refinement phase, over the coming two years, researchers will need a particularly stable source of light to test CHEOPS’s detectors.

Until recently, there has been no instrument capable of producing a light source with sufficient stability to be used as a reference for this purpose. But now a team from the University of Geneva (UNIGE), Switzerland, has filed a European patent on just such an optical source.

Designed by Swiss researchers and built by the University of Berne, the CHEOPS satellite’s mission will be to study exoplanets that are located close to our solar system. With high-precision photometry, the satellite will detect the passage of a planet in front of its star, by measuring the latter’s diminishing luminosity during transit. Scientists will thus be able to deduce the diameter of the exoplanet under observation.

In order to detect planets similar to planet Earth, the satellite will need to measure the luminosity of a star with exceptional stability (to an accuracy of 0.002%). CHEOPS’s sensors must be tested with a source of light whose stability is 10 times superior than that demanded by the satellite itself. Since no existing light source could guarantee this level of stability, UNIGE engineers and technicians and the PlanetS national research center designed a brand-new instrument, which produces what the team is calling “the most stable light source in the world”. 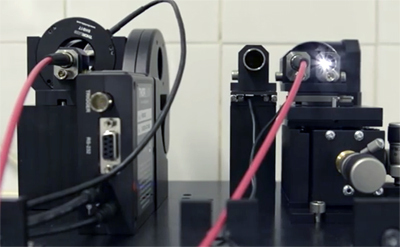 High stability: the new source in the lab.

Unlike other high-precision light source procedures, which stabilize light at its source, the system developed in Geneva modifies the intensity of a beam of light. By activating a so-called mobile finger, which more or less obscures the beam of light, the intensity and finally the stability of the light can then be modulated.

François Wildi, an engineer in UNIGE’s Department of Astronomy, and a member of PlanetS, said, “We have presented our instrument to the American leaders of NASA’s TESS mission [Transiting Exoplantery Survey Satellite], which is a satellite researching exoplanets, and they were so enthusiastic that they have ordered one from us.”

Having proved themselves in the laboratory setting, thanks to the stable light source, the CHEOPS detectors will now be subjected to more tests – using the same source, but under “space conditions” – in a University of Berne simulation tank whose temperature variations reflect those that the satellite will encounter in space.

Michaël Sordet, the engineer in charge of the CHEOPS tests, explained how the new source can test the stability of the CCD photometers to be mounted on the satellite: “CCD tests are time-consuming and require the analysis of a huge amount of data. Since the beginning of the test measurements, more than 4 TBytes have been collected.

"The procedure had to be developed, and then to be tested with two Engineering Models before testing the three Flight Models, supplied by the CCD manufacturer. “Once the CCD is selected we will move to Bern to test it in flight conditions. The CCD will then be plunged into the vacuum tank which is located in the clean room of the University of Bern and subjected to temperature variations expected in space.”

The following NCCR PlanetS video shows the entire Cheops mechanism, the shutter, the finger, the filter wheel and the stabilized beam: