The 3D printing industry continues to grow from strength to strength. According to the latest market report 3D Printing 2015-2025: Technologies, Markets, Players, published by IDTechEx, Cambridge, UK, this industry is set to boom from $1bn in 2012 to $20bn in 2025.

This growth, says the report’s lead author Dr Jon Harrop, Director at IDTechEx, is due to both improvements in existing printing technologies and the development of completely new technologies. “IDTechEx has been tracking the 3D printing industry for many years by attending events and interviewing major players. All of the information gathered is collated in comprehensive databases of manufacturers, service bureaus and printers,” he said. 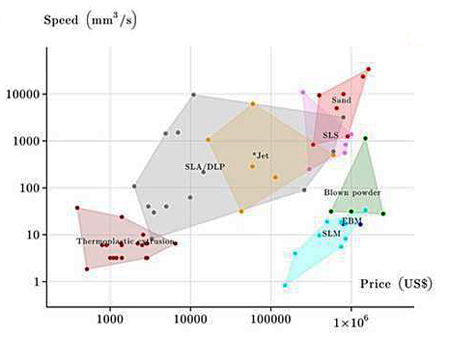 Some of the major conclusions of the report are summarized and explained graphically in the following chart (see right).

The report notes that plastic printing technologies (including thermoplastic extrusion, SLA/SLP, *Jet and SLS) are now offering increasing speed with increasing price starting with thermoplastic extrusion and going through SLA/DLP and jetting to SLS. For plastic printers, the price v speed tradeoff is the single biggest key differentiator between the products on the market.

In contrast, metal printers vary greatly in terms of speed but vary relatively little in terms of price. Specifically, speeds range from 1 to 3,000mm3/s whereas typical prices range from $150k to $3m. When it comes to metal 3D printers, price is clearly not the main differentiator, says the report.

In terms of progress in 3D printing technologies, the upper left quadrant represents printers that are both cheap and fast. The report states that this market sector is “clearly sparsely populated today”, but adds that, “Several players are pushing into this region including Carbon3D’s high-speed vat photopolymerisation and HP’s high speed Multijet Fusion.” 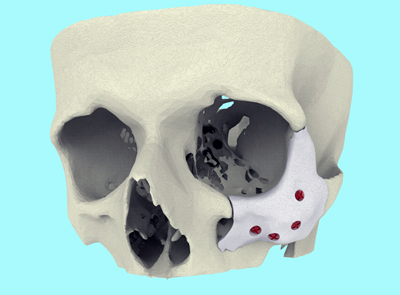 Xilloc's CT-Bone is described as "real bone from a 3D Printer".

3D custom implant developer Xilloc, a spin-off from Maastricht Instruments, has invested in four industrial 3D printers from German company EOS, a manufacturer of high-end Additive Manufacturing solutions. Amongst the four machines is the EOS M 400, one of the largest metal machines currently available on the market.

The Dutch company Xilloc gained its reputation in the medical sector with the world’s first 3D printed titanium skull implant in 2006 and the first 3D printed full mandible replacement in 2011. Earlier in 2015, Xilloc introduced a new bone-like 3D printing implant material. The company is the first to offer industrial 3D printing services in all printable materials: metals, polymers and ceramics.

Now, Xilloc has launched an industrial business unit with the aim of providing the same high quality 3D printing services necessary for their medical activities, also to companies in other sectors, like aerospace, automotive and tooling. The EOS acquisitions are needed to support this expansion.

Maikel Beerens, CEO of Xilloc, said, ”With these impressive additions, Xilloc has established an advanced manufacturing facility, which also includes state-of-art automated milling machines. We takes pride in delivering the highest quality to its customers which is why we have chosen to work with the systems from EOS."