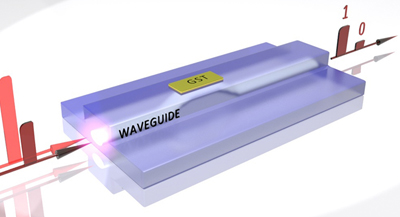 A partnership between scientists at Karlsruhe Institute of Technology, and the universities of Münster, also Germany, and Oxford and Exeter, both UK, has developed the first all-optical permanent on-chip memory. Phase-change materials that change their optical properties depending on the arrangement of their constituent atoms allow for the storage of several bits in a single cell. The work is described in the latest issue of Nature Photonics.

While optical fibers have long been used for the transmission of data with light, inside a computer, data are almost invariably processed and stored electronically. But electronic exchange of data between processors and the memory limits the speed of modern computers. To overcome this so-called von Neumann bottleneck, it is not sufficient to optically connect memory and processor, as the optical signals have to be converted into electric signals again. Therefore scientists have been seeking methods to carry out all-optical calculations and data storage.

The KIT-led team have now developed the first all-optical, non-volatile on-chip memory. Professor Wolfram Pernice explained, “Optical bits can be written at frequencies of up to a gigahertz. This allows for extremely quick data storage by our all-photonic memory.” Pernice headed a working group of the KIT Institute of Nanotechnology and recently moved to the University of Münster.

Professor Harish Bhaskaran of Oxford University added, “The memory we have developed is compatible not only with conventional optical fiber data transmission, but also with the latest optical processors. The new memory can store data for decades even when the power is off. Its capacity to store many bits in a single cell measuring just 1nm across featuring a multi-level memory is a highly attractive format.”

Instead of the usual binary information values of 0 and 1, several other states can be stored in an element, which can also make autonomous calculations. This is due to the presence of so-called phase change materials, which are novel materials that change their optical properties depending on the arrangement of the atoms.

The scientists conclude that permanent all-optical on-chip memories could “considerably increase future performance of computers while reducing their energy consumption. Together with all-optical connections, they could reduce latencies [delays]. Significantly, energy-intensive conversion of optical signals into electronic signals and vice versa would no longer be required.

The Nature Photonics paper states, “By using optical near-field effects, we realize bit storage of up to eight levels in a single device that readily switches between intermediate states. Our on-chip memory cells feature single-shot readout and switching energies as low as 13.4pJ at speeds approaching 1GHz. We show that individual memory elements can be addressed using a wavelength-multiplexing scheme. Our multi-level, multi-bit devices provide a pathway towards eliminating the von Neumann bottleneck and portend a new paradigm in all-photonic memory and non-conventional computing.”