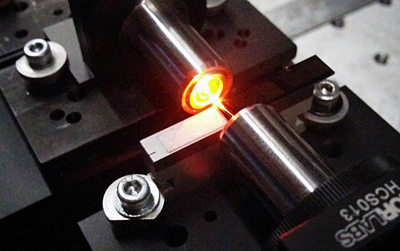 Scientists from University of Twente’s research institute MESA+ (Twente, Netherlands) have now managed to equip low-loss light chips with new “active functionalities”, such as generating, strengthening, and modulating light beams. The MESA+ chip can create a very wide light spectrum spanning blue to infrared (470 to 2130nm). By doing so the developers say they have made “a light chip with the largest frequency range ever”.

The scientists explain the advantages of their development thus: “The width and regularity of a generated light spectrum are key to the ability to transmit information in an optical system. With a broader spectrum, meaning a larger variety of colors in the light, and a large number of light channels set next to each other, you can process a larger amount of information faster.”

Creating such a spectrum with many individual lasers is technically complex, expensive and less precise than from an integrated source. The MESA+ researchers have for a long time been looking for methods to generate the broadest possible light spectrum on a chip. The Twente scientists have now successfully managed to create a light chip with what they are calling “the broadest light spectrum ever”.

The chip achieves a bandwidth of 495THz, which is more than 50% wider than the previous record. According to research leader Prof. Dr Klaus Boller this broad spectrum demonstrates the potential of the technology. He said, “However, the most important breakthrough is that we have managed to create it with the help of materials that have already proven themselves in practice. These materials have the lowest optic losses on a chip and are, therefore, already extremely relevant. What's more, the fabrication matches the standard processes in the chip industry, making it suitable for mass production.” 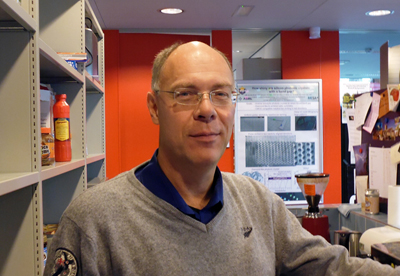 In order to generate the broad spectrum, the researchers shone laser light into a waveguide, made of silicon nitride, a glass-like material, embedded in regular glass (silicon dioxide). The shape and construction of the waveguide ensures that the laser light generates new wavelengths as it passes through; in this case from 4THz to a “remarkable” 495THz.

Prof. Boller added, “One of the key challenges of the research was ensuring that the silicon nitride did not crack during the manufacture of the waveguides. However, with our new fabrication technique, we have managed to create a structure, which at 800 nanometers, is thick enough.”

The spectrum created by this chip is not constant, but comprises about 12 million peaks that lie at exactly the same distance from each other. Because of this, the spectrum looks like a hair comb; which is why such spectra are called a “frequency comb”. Frequency combs, a fast-growing field of research, make it possible to not only increase the speed of optic communication techniques, but also to greatly improve the precision of atomic clocks, telescopes, and GPS equipment.

The research was performed by scientists from the Laser Physics and Nonlinear Optics department of UT research institute MESA+ (within the strategic research direction Applied Nanophotonics) in collaboration with the Westfälische Wilhelms-Universität (WWU) Münster and the companies LioniX and XiO Photonics. The research was financially supported by the Technology Foundation STW and recently published in Optics Express. 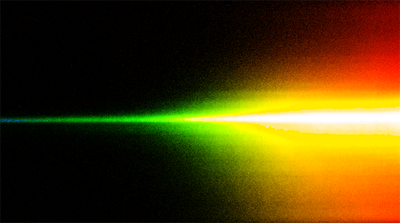 Objective: the broadest possible light spectrum from one chip.

Ultra-broadband The Optics Express article concludes: “We have shown ultra-broadband on-chip supercontinuum generation in CMOS-compatible Si3N4 waveguides. When pumped at a center wavelength of 1064nm with pulses of 115 fs duration, the generated spectrum ranges from the visible blue range (470 nm) to the infrared (2130 nm) and comprises a spectral bandwidth of more than 495 THz.

”This is, to our knowledge, the widest supercontinuum ever generated on a chip. The visible to infrared coverage, extending throughout most of the transparency range of Si3N4 and SiO2, appears to be highly attractive for applications such as for self-referencing optical frequency combs on a chip or widely tunable light sources for label-free microscopy and imaging in life sciences.”