The team from IK4 Lortek, TechniTest (Spain), GKN Aerospace and University West (Sweden), has been working for two and a half years developing the method. The background to 18-WeLdt, is the global requirement to decrease fuel consumption in aero engines, for which reduced weight is one possible solution. But a risk with lighter structures is reduced margin of safety in the engineering and construction.

Anna Runnemalm, project coordinator and assistant professor in Experimental Mechanics at University West, Sweden, commented, “When the project started in 2013, its aim was to develop a means to inspect welds in hard-to-reach areas. We have been successful and we have developed an automatic inspection cell in our workshop. Our results look really promising.” 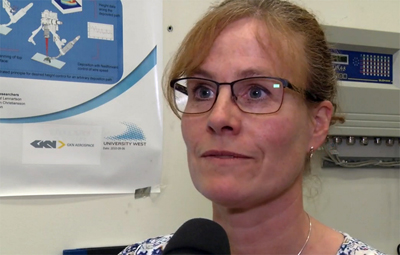 Professor Runnemalm continued, “One step to solve that problem is increasing the quality control in production and regular maintenance inspection. With an increased need of inspection there is a demand on automation solutions. The design of the aero engines of today and tomorrow is also a challenge when it comes to inspection due to the location of the welds, in hard to reach areas, which requires new methods for inspection.”

The project partners have together evaluated and developed the method and algorithms for automatic inspection of welds, such as are found in relatively inaccessible turbine stator blades. So-called surface-breaking cracks has been the focus: traditional non-destructive testing methods (NDT) for detecting surface breaking cracks use penetrant and eddy-current inspection, and in some cases ultrasonic testing. Those methods all have limitations when it comes to hard to reach areas.

The NDT methods that have been used in 18-WeLdt project are based on thermography. The idea is to cause controlled heating of the surface (“excitation”) then to record the heating and cooling sequence with an infrared thermal camera – from Flir in the experimental set up. A range different excitation methods have been studied and evaluated, including: flash lamp, induction heating, continuous laser illumination and vibration.

The method can detect surface cracks of 30µm in, for example, Inconel, the nickel-chromium-based superalloy that is used in airplane turbine blades and related components. Research is already ongoing with other crack sizes and materials. 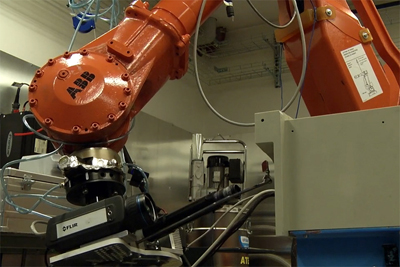 The weld scanning system is mounted on a robot arm.

Nigel Thorpe, Technical Consultant at TecniTest, Madrid, Spain, commented, “We have evaluated different methods over time and we have found that for this particular application, thermography with laser-induced heat is the best for this method. We believe it will make a difference by improving the whole process of inspecting in these remote areas, specifically in the stator, and there will certainly be lots of other applications, where this method can be used.”

One of the larger challenges in the project has been the inspection of welds with limited access. Different solutions have been studied, such as miniaturization of thermal cameras and solutions using borescopes. The overall result of the project is a demonstrator based on a thermography system with an infrared thermal camera, with weld area excitation achieved by a continuous laser line in combination with a borescope for performing both the excitation and the viewing. The entire system is mounted on a robot arm, making it possible to automatic scan hard to reach areas.

Thorpe added, “The cost of this thing is not cheap but the overall project, should it come to fruition, will save a vast amount of money because of time saved in such tests and because it’s automated it will also save money in personnel time as well. It will certainly have an impact in the aerospace industry, but also in the motor industry and possibly the oil and gas industry, where there are many remote areas in structures and in the nuclear industry, where you cannot inspect remotely, which is where this particular technology will be useful.”

The 18-Weldt project was completed at the end of July and the results first presented and demonstrated at the university’s Production Technology Center in Trollhättan, Sweden. A video sequence from the demonstration is available here. The project was financially supported by Air Transport Net.