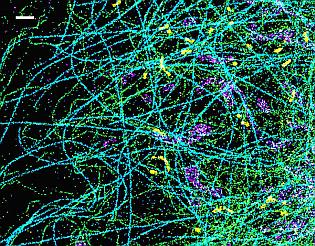 Live and in color: SR-STORM

Major advances in super-resolution microscopy techniques have been made - and recognized - in recent months, as researchers successfully resolve images beyond the notional diffraction limits of fluorescence spectroscopy.

But one form of valuable information has remained harder to gather with super-resolution platforms: as spatial resolution has increased, spectral data has remained absent.

That barrier has now been breached, thanks to a technique christened spectrally resolved stochastic optical reconstruction microscopy (SR-STORM) developed by a team at Lawrence Berkeley National Laboratory.

The team has reported how it synchronously obtained the fluorescence spectra and positions of around 106 single molecules within labeled cells in a short period of time, producing spectrally resolved and "true-color" super-resolution microscopy images. The work was published in Nature Methods.

"This is the first spectral measurement from a STORM technique," commented Ke Xu of Berkeley Lab’s Life Sciences Division. "Some indirect spectral information has been obtained previously, by splitting the fluorescence on a dichroic mirror for two-channel detection; but that does not actually resolve the spectrum."

STORM, like the related super-resolution technique PALM, is a wide-field fluorescence microscopy imaging method rather than a confocal spot-scanning system. It achieves high resolution by applying a relatively low-power activation laser, ensuring that any particular molecule has only a finite chance of being photo-activated, while the bulk of the surrounding population remains unaffected.

Multiple applications of the fluorescence probe builds up a map of the active species' distribution, including ones spaced so closely together that they would fall within the same diffraction-limited volume, and hence be unresolvable otherwise.

Dual objectives
SR-STORM and the principles behind it were originally conceived by Xu during his postdoctoral work at Harvard with Xiaowei Zhuang, a pioneer of the STORM technique, and makes use of a dual-objective scheme. In the architecture now developed at Berkeley, the two microscope lenses face each other, effectively viewing the front and back of a sample at the same time.

"One noticeable challenge for wide-field spectroscopy is that the spatial and spectral information of a randomly located single molecule become coupled, due to the spreading out of the spectrum as a function of space on the camera," commented Xu. "This means that by obtaining the dispersed single-molecule spectra alone, you could not determine the wavelength extent of each spectrum. A redder molecule may appear identical to a bluer molecule that physically locates further to the right on the camera, for example."

The solution required the concurrent acquisition of both the non-dispersed images and the dispersed spectra of the same single molecules in the wide-field. Hence the dual-objective system: one objective obtains and decouples the location, while the matching spectra in the other objective are used to tag each localized molecule with a spectral signature.

Commenting for Optics.org on the potential of the new platform, Mark Neil of Imperial College said that it marked a further improvement in localizing the fluorescence emission from single molecules in order to generate a super-resolved image.

"Normally in fluorescence imaging, including STORM techniques, different molecular labels emitting in different spectral regions - eg. red and green - are imaged, using optical filters to isolate the emission from the different labels," Neil said. "With such methods you can normally only get perhaps four different channels across the whole visible spectrum, and even then it is difficult to find dyes suitable for localization microscopy techniques. Most current users might use two dyes at best."

True color
In the Nature Methods paper, the Berkeley team used the SR-STORM technique to reveal the three-dimensional ultra-structure of the actin cytoskeleton in cell samples. Operating the imaging camera at a rate of 110 Hz and applying a comparable photo-switching rate for labeled single molecules, the positions and spectra of millions of molecules could be concurrently obtained over the full camera frame in a few minutes.

The experiment also included dying the sample with 14 different dyes whose emissions fall within a narrow spectral window. Spectra of the individual molecules turned out to be surprisingly different, and identifiable via SR-STORM.

Previous multi-color approaches to STORM achieved false-color images by associating each particular labeled dye with a particular detected molecule; but SR-STORM yields the measured true-color spectral mean of each molecule. Distinct colors from individual structures beyond the diffraction limit were readily obtained, and turned out to agree closely with the known spectra of the corresponding dye.

Having successfully proven the principle, Xu is now working on a system that can produce similar results but operate using only a single objective lens.

"While a dual-objective design was used in this study, our method should also work for single-objective systems by splitting the collected signal into two optical paths; and that's the direction we taking," Xu said. "The system will be particularly suitable for imaging live cells, and we hope our method - in combination with the development of suitable dyes and probes - will enable the monitoring of the local environment in live cells."

This could be a significant step towards working out what is going on in the chemical surroundings of each molecule, as Neil noted. "Factors such as pH or the binding to other molecules can cause subtle changes in the spectrum of their emission," he commented. "This technique can reveal those changes, as it looks explicitly for the fine details in the spectral signature of each molecule imaged."