When adjusted for the divestiture of JK Lasers to Trumpf, laser revenues climbed 9% in latest quarter. 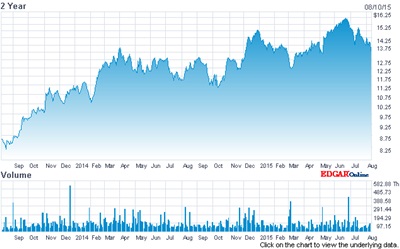 On the up: GSI Group's stock price (past two years)

Executives at GSI Group, which recently sold its JK Lasers division to Trumpf, have reported a solid financial quarter, with sales of carbon dioxide lasers and optical scanning equipment growing at a healthy clip.

Overall, GSI posted a very slight decline in revenues, to $96.5 million for the three months that ended on July 3. But once the figures attributable to JK Lasers are stripped out, the picture looks much healthier.

JK had been contributing around $5 million each quarter, but struggling to make much impact with its fiber lasers when up against the likes of IPG Photonics, JDSU and Rofin-Sinar. The decision to sell the division for close to $32 million in April also looks to have had a positive impact on GSI’s bottom line.

In the latest quarter, GSI’s remaining laser products division – largely comprising the Synrad carbon dioxide laser brand and galvo-based optical beam delivery systems from Cambridge Technology - still posted sales of $42.2 million. That figure was up 9 per cent on the same period last year thanks to applications like laser marking and via hole drilling.

CEO John Roush said that the new “P400” laser from Synrad, part of the Pulstar series, had generated good interest in the market. It offers higher-power pulses than previous versions, meaning faster processing speeds for its customers.

Laser picture “robust”
The laser division’s profitability was also up strongly, helping to offset a weaker quarter for GSI’s “vision technologies” business division, which sells a variety of equipment for capturing, analysing and displaying data. Weak demand from the US healthcare sector was the chief reason for that.

“The overall picture for carbon dioxide lasers is very robust,” Roush added, in spite of ongoing sluggishness in the Chinese economy. Orders for scanning equipment were also up very strongly.

“While some of our medical end-markets were slower in the quarter, we saw signs of strengthening, in applications such as patient monitoring, robotics, and optical coherence tomography," Roush told investors. “Advanced industrial applications continued to remain strong, particularly in laser marking and coding, laser converting, and a handful of electronic circuitry applications.”

He and CFO Robert Buckley still expect the company to deliver sales of around $370 million for the full financial year, a figure that would represent close to 8 per cent growth on the 2014 figure – after the JK Lasers sales are ignored.

• The latest results seemed to have little immediate impact on Nasdaq-listed GSI’s stock price, although the long-term trend over the past two years has been a positive one. Trading at around $13.50 on August 10, GSI’s market capitalization stood at just over $460 million.