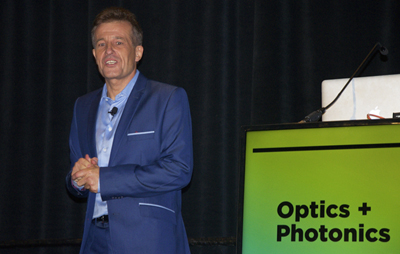 by Matthew Peach in San Diego
Professor Artur Chmielewski’s opening plenary presentation at this week’s Optics + Photonics conference and exhibition in San Diego reviewed the Rosetta Mission, which last year set down the Philae lander on comet “67P”, while more than 400 million kilometers from earth. He also informed the conference about the next scientific steps in the photonics-heavy project.

The European and German Space Agencies built the Rosetta spacecraft, which transported Philae to the comet, and the US has donated various pieces of equipment to the project, he explained. "Rosetta is about the size of the biggest SUV [Philae is a more modest regrigerator-sized probe], which was launched about 10 years ago. Besides the instruments, the US also provides about 45 scientists and we shared the job of navigation to reach the comet. It has been a very difficult challenge and I take my hat off to the navigators, who achieved centimeter-precision control of the spacecraft over 400 million kilometers, which to me is mind-boggling."

Why visit a comet?

Chmielewski, who is the US Rosetta Project Manager, based at NASA, said, “The reason comets are interesting is because if we try to figure out the origin of our Solar System with the so-called Nice Model, we have a problem because we cannot know exactly what were the earliest actions that formed the sun and planets. "No matter how deep we dig in the earth, it’s all processed material, because there has been so much volcanic activity, decomposition and so on, which has affected the material formed at the beginning, 4.6 million years ago. It’s very difficult to go back in time to figure out what was the nature of the original material.” 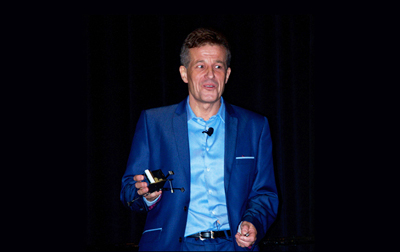 Comets are interesting, he said, because they were formed in the Solar System’s “suburbs” – far away from the degrading influence of sun. “Their material is pristine, it’s frozen, and preserved for us to investigate. So if we can just get to a comet, we can find out what the early molecules were that formed, which is why scientists are so excited about it.

”Another interesting thing about comets is that scientists think that they may have brought the water to the earth. If we could just taste the water on the comet, we could see if it was the same water that we find on earth, by investigating the deuterium-to-hydrogen [D:H] ratio in the comet water, for example, and see if it has the same isotopic ratio in terrestrial water.”

He revisted last year’s big story of the difficult placing of the Philae lander onto the supposedly “duck-shaped” 67P - which became a running joke in his talk - and the return of the first data and images, as reported in optics.org.

“Following the hibernation caused by the lander’s solar panels being hidden in the shade of crevice on the comet, we are once again getting valuable data from Philae," he continued. “Next week is the perihelion – the comet’s closest flight-path to the sun – which will provide a new opportunity for investigation. For the next year or so, the orbits of the comet and of earth will be at their closest approach.”

Chmielewski added, ”We are having to move the orbiting Rosetta spaceship away from the comet because it’s getting so active. There’s a lot of ice and particles coming off the comet now. Also the onboard star-trackers, which are used to position the spaceship, are getting confused because of all of the ice fragments flying around.” 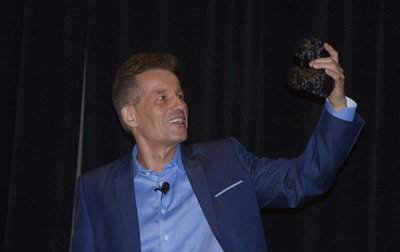 Duck-shaped? Comet P67 can expect another visitor in 2016.

He also explained what data Philae’s various onboard sensors have been sending back: “We have been learning about the magnetisation of the comet – which is actually about the size of downtown San Diego – and the nature of its water and organic molecules.

“In fact, the D-H ratio is about twice the concentration of that in earth’s oceans so one conclusion is that our water almost certainly did not come form comets such as 67P. But we discovered a lot of organic molecules including four types that have never been seen on other comets. Some of them are exciting the scientists because they are the ones that contribute to some of the chains that form proteins in DNA.“

He concluded with a project update (and his final duck-related joke), decided just a few days before this meeting - that the Rosetta scientists have now determined how they will be completing this mission: “We will be landing the Rosetta orbiter itself on the comet in 2016 so that will also be generating more exciting data. So we are very happy that the partners NASA, European Space Agency and the DLR (German Space Agency), which built the lander, have now gotten all of their ducks in a row.”