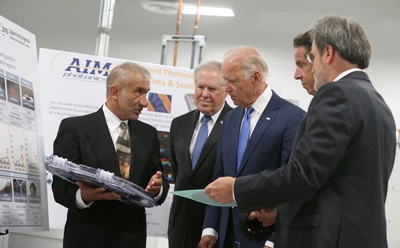 by Mike Hatcher
Vice President Joe Biden topped the bill as a phalanx of US politicians descended on upstate New York to hail the news that Rochester will form the central hub of a $610 million effort to advance photonics manufacturing capability.

Re-christened as the American Institute for Manufacturing Integrated Photonics (AIM Photonics for short), the New York-led consortium lists 124 partners, including 55 companies, across 20 states. Among the private-sector partners are big-hitters like IBM, GE, Raytheon and Lockheed Martin, alongside the likes of Chiral Photonics, Optimax and TeraDiode.

Last week, news leaked that the New York bid had beaten stiff competition from central Florida and southern California – and this week saw the Rochester team in celebratory mood as Biden and New York governor Andrew Cuomo led tributes to the region’s innovative qualities and rich history in optics and photonics.

Arriving to fanfare and a standing ovation, Biden said that photonics technology had extraordinary potential for civilian and defense applications, pointing to the recent imaging of Pluto and suggesting that the use of integrated photonics in data centers could reduce energy consumption by two orders of magnitude.

Quoting Nobel laureate Sir William Bragg 100 years after he and his son Lawrence shared the 1915 physics prize, Biden added: “Light brings the us the news of the universe.” He also likened the investment in photonics innovation as a way to emulate historic efforts to boost the US economy, such as Lincoln’s trans-continental railroad and Eisenhower’s establishment of DARPA. 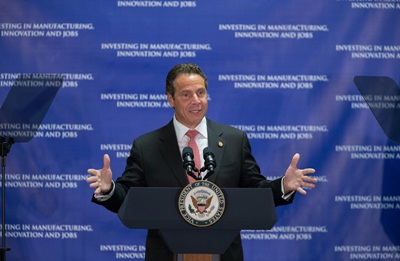 Cuomo influence
Biden also hailed the influence of Governor Cuomo, saying that he had provided the vision for the new manufacturing institute. “He’s the reason why you won the competition,” Biden said.

Taking to the stage shortly before the vice president, Cuomo himself said: “New York has always been a leader when it comes to thinking big about what tomorrow holds – and today in Rochester, we’re seeing an even brighter vision for what the future will be.”

Cuomo appears to have brought plenty of money to the table alongside his vision. Armed with $110 million in federal funding via the Department of Defense, the AIM Photonics hub is also set to receive more than $250 million from New York State to “to equip, install, and make operational a state-of-the-art photonics prototyping operation”.

"That we are in the Eastman Kodak building today is so fitting, because Eastman Kodak was the vision for a manufacturing economy that came from Rochester’s intellectual capital a generation ago," Cuomo said. "And then the building sat empty. And now it is going to be photonics and understanding fiber optics and how photonics works with the semiconductor industry."

The intention in establishing the groundbreaking photonics consortium is to create a national infrastructure based on an open foundry model that is widely accessible and financially self-sustaining.

Though headquartered in Rochester, with the University of Rochester’s senior VP for research Rob Clark becoming chairman of the AIM Photonics board of directors, there will be key additional operations across New York, including the SUNY Polytechnic NanoTech Campus in Albany. SUNY Polytechnic’s executive VP of innovation, technology and research Michael Liehr will be AIM’s CEO.

“This is historic,” added Seligman. “AIM Photonics will provide and empower the absolute best talent, sustainable relationships and infrastructure required to capture and sustain U.S. global leadership in this critical industry."

Making his address after Rochester mayor Lovely Warren, Congress representatives Tom Reed and Louise Slaughter, and SUNY Polytechnic Institute CEO Alain Kaloyeros had all saluted the winning team – with Slaughter hailing the announcement as “one of the greatest days in the history of Rochester” - Cuomo said:

“The future doesn’t just happen. You have to go out and make it happen.” Referring to the devastating impact that the demise of the Eastman-Kodak company had had on the local economy, he added: “Now we have a picture of what the next generation of economic investment is all about. Let’s keep that momentum going.” 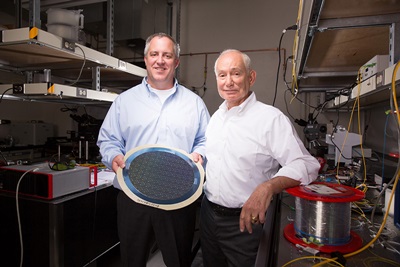 Watts and Kimerling at MIT

Country-wide consortium
Among the many partners in the New York-led consortium are key locations for photonics development, including the Massachusetts Institute of Technology (MIT), the University of Arizona’s (UA) College of Optical Sciences (OSC), and the University of California, Santa Barbara (UCSB).

The OSC’s dean Tom Koch said: "It has been gratifying to see so many of the major stakeholders in the photonic integration community join together to support this major federal initiative.

“We are also indebted to the National Photonics Initiative (NPI) for its support in advancing the cause. The applications that will be enabled by chip-scale, highly integrated photonics and electronics are boundless.”

OSC participation in the AIM Photonics effort will encompass the work of Nasser Peyghambarian, Robert Norwood and Stanley Pau, announced UA, while the Arizona Commerce Authority has committed up to $2.5 million of tax incentives over the initial five-year period of the new institute to Arizona companies that support AIM Photonics programs at the university.

“The support of the state of Arizona has positioned us well for national participation,” added Koch. “The role and influence of our own Optics Valley here in Tucson should also not be understated. These firms continually demonstrate the University’s propensity to move discovery to the marketplace.”

Meanwhile MIT will manage key parts of the AIM Photonics program. For example Michael Watts is set to head up an effort focused on silicon photonics, while Lionel Kimerling, the Thomas Lord Professor in Materials Science and Engineering, will lead a program in education and workforce development.

“Europe is ahead in industry co-ordination right now,” Kimerling reckons. He points out that the AIM Photonics initiative is one of the first of its kind in the US, adding: “The bet is that the innovation and research here, combined with the manufacturing capability, will allow our companies to really take off.”

Watts says that among the many examples of applications set to benefit from highly integrated photonics could be lidar systems for collision-avoidance in cars. “LIDAR systems that exist today are both bulky and expensive, because they use mechanically scanned lasers,” he says.

Developing that kind of functionality at the nano-scale, using phased-array systems on a chip, could drastically reduce size and cost, providing high-resolution 3-D imaging capabilities on a chip, he predicted.

Kimerling echoed comments by Biden and others at the Rochester launch that a significant issue in developing a robust photonics industry is the need to develop a trained workforce of people who are familiar with both electronics and optical technology. Until now, they have been regarded as two very different fields.

He believes that educational programs encompassing both optics and electronics are important simply do not exist today in one organization.

One expected impact of the new initiative is the development of a Silicon Valley-like corridor along Interstate 90, between Boston and Rochester, of industrial firms building on the base of new photonics technology to develop related products and services. 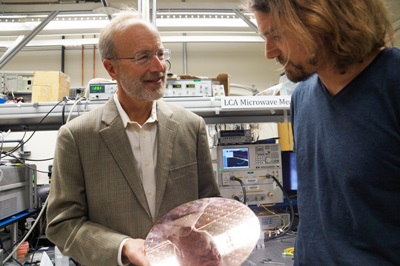 West Coast hub at UCSB
West Coast operations of the AIM hub will be co-ordinated at UCSB under the leadership of John Bowers, professor of electrical and computer engineering and director of the campus's Institute for Energy Efficiency (IEE).

“AIM and UC Santa Barbara are leading a revolution that is integrating photonics and electronics for the benefits of both,” Bowers said. "Our goal is to use CMOS processing to move photonics onto silicon and accelerate the integration of photonics and eliminate the data bottleneck that advanced silicon chips are facing during the next decade."

Californian campuses at Stanford, Davis, Berkeley and San Diego are also involved, while Rod Alferness, dean of the College of Engineering at UCSB, said: "UCSB is a worldwide leader in integrating lasers onto silicon. Many new companies have spun out of our photonics research, including Aurrion, Agility, Calient Networks, Soraa, Aerius Photonics and Freedom Photonics."

• For more information on the AIM Photonics consortium, see the Whitehouse factsheet.