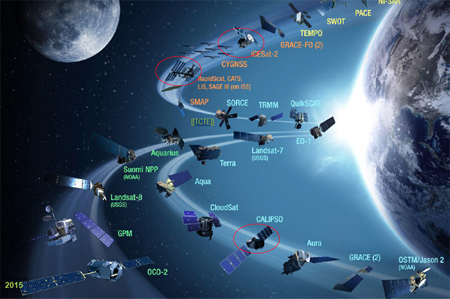 The technology challenges for spaceborne active optical sensing of earth science measurements, was the subject of a presentation at Optics+Photonics 2015, last week in San Diego, as part of a wider series of presentations on space-related lasers and technologies, chaired by Dr Upendra Singh, Associate Director for Sensors Systems at NASA Langley Research Center.

Komar told the conference, “Many of today’s key science measurements made from satellites orbiting the earth rely on laser instruments and there is a diverse range of applications. Active optical sensing systems offer promising options for several key Earth science measurements that include: Column CO2, tropospheric winds, ozone and water-vapor profiling, and analysis of surface topography and vegetation.” 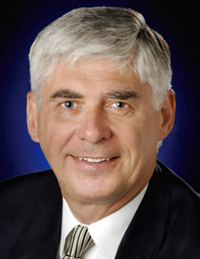 He added, ”I want to bring your attention to the three particular projects that are carrying lasers. Of all of the projects we are operating in space at he moment only three have lasers on board because it is actually quite hard to get a lasers to work in space. The laser-based systems are on ICESAT-2 and CALIPSO, which are satellites, and RapidScat, CATS, LIS, and SAGE III, which are on board the International Space Station.”

Komar went to on to detail how the various laser-based systems are performing a range of analytical functions from space (and their project code names):

Explaining how ESTO was seeking to improve its capabilities to conduct a range of measurements of earth-environmental conditions, Komar then described how he would like to have at his disposal a range of enhanced powers and efficiencies of various lasers (see table below) to improve the delivery of critical data. 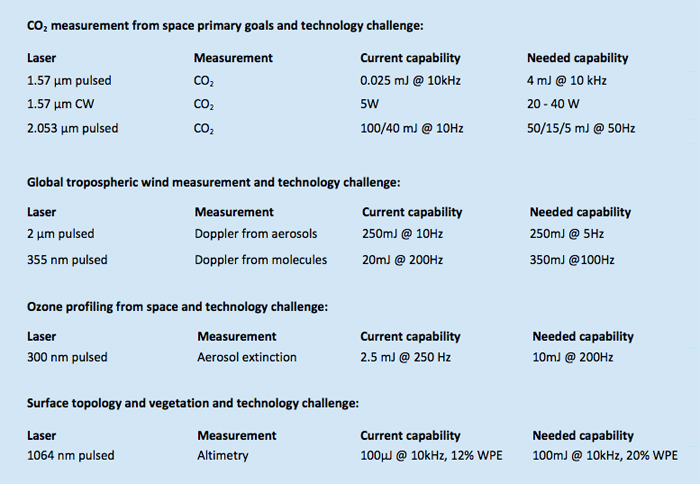 He concluded, “There are still significant technology challenges for space-based active optical systems. Most prominent is the requirement for higher power systems, then second is the requirement for higher efficiency, which is driving all platforms issues in terms of thermal, power, and mass on onboard systems. These challenges can make sharing platforms very difficult. The environment is challenging with ever-present factors such as potential for damage, degradation and contamination. So the coatings and materials, pump-diode reliability and scaled power are all significant issues.

"Nevertheless, ESTO investments continue to support key earth science measurements. Active optical remote sensing remains a key technology for NASA’s Earth Science Programs through surface-, aircraft-, and space-based observations. And we believe that building on the relevant science is the key to our future plans and success.”