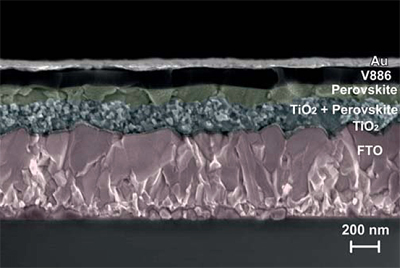 SEM showing 100nm-thick layer of V886 as a hole conductor.

Researchers at Lithuania’s Kaunas University of Technology (KTU) Organic Chemistry department have developed a new semiconductor material, they call V886, which, they say, “offers a much cheaper alternative to those currently used in hybrid solar cells”.

The efficiency of the new semi-conductor – methoxydiphenylamine-substituted carbazole, a hole-transporting material – has been confirmed at the Swiss Federal Institute of Technology, Lausanne (EPFL). The joint work of the Kaunas and EPFL teams was published in Angewandte Chemie International Edition.

The solar cells containing organic semiconductors created at KTU were constructed and tested by physicists at Lausanne. The tests revealed that the efficiency of the cells’ converting solar energy into electricity was 16.9%.

Professor Getautis, head of the Kaunas research group, commented, "The material created by us is considerably cheaper and the process of its synthesis is less complicated than that of the currently-used analog material. Also, both materials have a similar efficiency of converting solar energy into electricity. That means that our semiconductor has similar characteristics to the known alternatives, but is much cheaper." 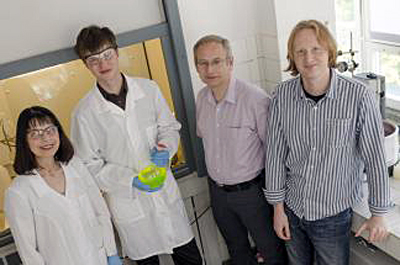 Prof Vytautas Getautis and his team at KTU.

The paper, jointly authored by KTU and EPFL (under Prof. Mohammad Nazeeruddin), describes the procedure thus: “The small-molecule-based hole-transporting material methoxydiphenylamine-substituted carbazole was synthesized and incorporated into a CH3NH3PbI3 perovskite solar cell, which displayed a power conversion efficiency of 16.91%, the second highest conversion efficiency after that of Spiro-OMeTAD.

“The investigated hole-transporting material was synthesized in two steps from commercially available and relatively inexpensive starting reagents. Various electro-optical measurements were carried out to characterize the new material.”

Prof Getautis said that the material will be used in the construction of future solar cells: “Almost all solar cells are made from inorganic semiconductors. Hybrid, semi-organic solar cells are still being developed and perfected at the research centers all over the world. KTU and Swiss Federal Institute of Technology Lausanne have registered the invention at the European Patent Office.”

He concluded, “In V886, we have demonstrated a small-molecule hole conductor that yields very high current density (>21 mA cm-2) and overall efficiency close to 17%. V886 is less expensive than the spiro hole conductors and we strongly believe that it can be also an ideal candidate for other optoelectronic applications such as OLEDs and solid-state dye-sensitized solar cells.

“Our paper is among the 5% of most important publications in one of the most influential chemistry journals followed by all undertaking research in the field of chemistry. This is great achievement for scientists from Lithuanian research institutions.”