by Andy Extance
The inventors of an unconventional, ribbon-shaped optical fiber geometry say that it could be set to drive fiber-laser power output dramatically, while maintaining beam quality.

Based at the Lawrence Livermore National Laboratory (LLNL) in California, the team is now working to bring its ribbon-core fibers to pulsed-laser applications, and could help to make commercial high-power fiber-laser systems more scalable.

The highest power fiber lasers available today with the kind of beam quality needed for combining stand at around 1.5 kW, underlined Mike Carter, a program manager for photon science at LLNL. When disregarding beam quality, LLNL’s modelling suggests the upper theoretical power limit from a single conventional fiber is around 40 kW.

Ribbon-core fibers, made by placing a line of doped silica rods in the center of a cylinder of undoped rods, can raise those limits. In such designs the approximately 8 x 108 µm central ribbon core has a higher refractive index than its surroundings, and thus preferentially guides light. Meanwhile, the surrounding 245 µm-diameter air-clad fiber extracts heat more efficiently.

One challenge is that this design is difficult to use with a conventional laser beam shape. Consequently, the LLNL team has developed a system to efficiently convert beams into a profile that propagates into the ribbon fiber and is converted back after it is amplified. 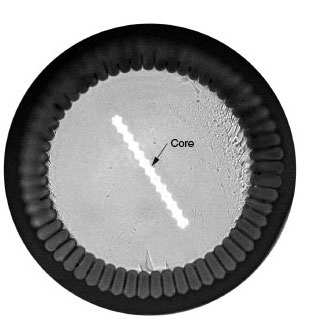 Can ribbons cut it?

Making bigger better
“You can set up similar mode-guiding properties to a small-diameter single fiber, spread out over a larger geometry,” explained Carter. “The higher-order modes that would normally creep into a large-diameter fiber are directed to a loss region and thus don’t exit the fiber.”

LLNL’s analysis suggests that by using this approach it should be possible to produce individual single-mode fiber lasers with an output power of 10 kW, and push multi-mode limits to at least 100 kW.

Reducing scattering losses and thermal damage could make fiber lasers even more reliable and efficient than they already are, and the higher powers would mean fewer systems need to be combined.

“PCFs enable efficient pump schemes as the pump numerical aperture is greatly increased, allowing more pump light to be converted to signal light,” he said. “This enables much more compact module/system design and potentially a much lower $/W cost of the laser.”

Poulsen adds that the LLNL team's efforts in this area are a good example of the seemingly exponential growth of such technology happening at the moment.

For the majority of commercial applications, such as welding and cutting, the short working distances employed mean that beam quality is not particularly important. Electrical efficiency and compactness are important but not critically, Carter said. Consequently he doesn’t feel that there’s currently a strong commercial pull for PCF-based lasers, even though such systems may have advantages once perfected.

“Sustainment of beam quality allows for more precise laser operations or the same operations at longer working distances,” Carter asserted. “Also, if we can reduce the number of building block fiber lasers needed to reach high powers by making each ribbon fiber carry more power, then they are likely to be broadly adopted if the cost of the fibers is the same. 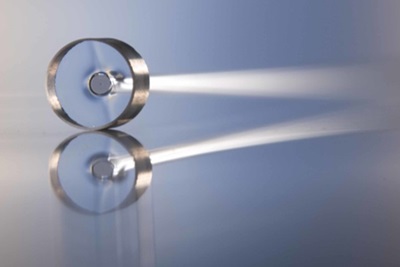 “The ribbon fibers are still at the research stage so we are not at the right performance levels yet to assess cost comparisons. But if it is successful, scalability at the same price would mean this technology could potentially completely replace current high-power fiber laser technologies.”

On the pulse
The LLNL researchers haven’t yet demonstrated high powers, having published ribbon-core fiber systems with outputs of just 40 W. However, this range already has practical applications. For example, in a NASA project where LLNL is collaborating with the San Jose, California fiber laser developer PolarOnyx.

The particular challenge in this project is achieving 100 MHz repetition rates with a wall-plug efficiency higher than 20 per cent, for high-rate optical communications in deep space. “In NASA’s deep-space missions power efficiency is very important,” Carter stressed.

Conventional fiber limitations mean that current commercial systems work well for tasks in which emission energies remain steady over time, but not for applications that require energy bursts. To deliver quality fiber-laser pulses at 100 MHz, PolarOnyx is exploiting LLNL’s PCFs.

NKT is likewise benefiting from such capabilities, albeit at higher powers. “Within materials processing requiring high peak and pulse energies, PCFs are being incorporated into numerous commercial laser platforms,” Poulsen said.

Average annual growth rates for such systems are in the high double-digit range, he revealed. “Today, PCF is no longer an upcoming technology, but has actually matured into numerous products with real industrial applications, especially in the bio-imaging and materials processing segments.”

Andy Extance is a freelance writer based in Exeter, UK.