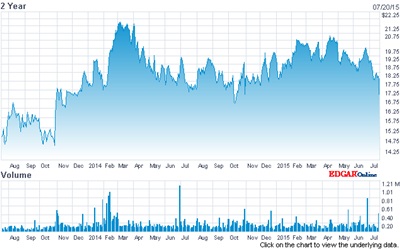 California-based laser and photonic component vendor Newport has dropped in value by around 10 per cent on the Nasdaq stock exchange after saying that it would miss sales targets in the second quarter of 2015.

The company now expects to post sales of between $147 million and $148 million - significantly outside the $154 million-$161 million range that its executives had previously forecast.

Aside from lower sales, Newport identified a $1.4 million loss from its newly acquired Femtolasers business unit as harming profitability. An inventory charge of around $1.1 million is another factor.

CEO Robert Phillippy said that the firm would be implementing “specific actions” to improve performance, but reiterated his belief that Newport would deliver record sales for 2015 overall.

Last year Newport posted record annual sales of $605 million, and the acquisitions of Femtolasers and Israeli fiber laser maker V-Gen had been expected to add around $30 million to that total in 2015.

Together with Newport’s first-quarter 2015 sales figure of $156.7 million, the second-quarter result would mean that the company is likely to post first-half revenues of just over $304 million.

With Phillippy and colleagues anticipating that second-half sales will exceed those in the first six months of 2015, the firm should still deliver a second successive year of record sales.

However, investors reacted to the financial update by sending Newport’s stock plunging in value by around 10 per cent in early trading on July 20. At just over $16, it was hovering at its lowest value since October 2013.

Newport said it would reveal full details of its second-quarter results on August 4.