Custom sensors from e2v technologies on board the New Horizons probe help capture extraordinary views of the dwarf planet. 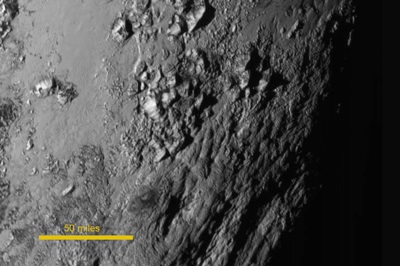 The optical instruments on board NASA’s New Horizons probe have lived up to expectations, wowing scientists and the general public with high-resolution, close-up views of Pluto in a high-speed encounter with the dwarf planet.

Thanks to a suite of instruments including ultraviolet, visible and infrared imaging spectrometers, based around custom sensors made more than a decade ago, the craft has captured images showing that Pluto is younger, slightly larger, more icy and far more complex than had previously been thought.

So small and distant that even the Hubble Space Telescope has been unable to deliver a clear view of it, Pluto now appears to have a range of icy mountains of similar altitude to the Alps, but at less than 100 million years old younger than the Himalayas.

The relative youth of the dwarf planet is inferred from a surprising lack of craters on Pluto’s surface, while the apparent signs of geological activity are a mystery at such colossal distances from either the sun or one of the larger planets.

“This may cause us to rethink what powers geological activity on many other icy worlds,” said John Spencer, deputy team leader of New Horizons’ Geology, Geophysics and Imaging Team.

Sensing methane ice
Two CCD detectors from e2v technologies, the UK-based manufacturer of image sensors, are on board the probe. One of those is used by the visible and infrared imaging spectrometer known as “Ralph”, yielding a ground resolution of just 250 meters on Pluto’s surface as New Horizons whizzed past at a speed of around 30,000 mph, and is already yielding scientific results.

“Spectroscopic data from New Horizons’ Ralph instruments reveal an abundance of methane ice, but with striking differences among regions across the frozen surface of Pluto,” NASA reported. 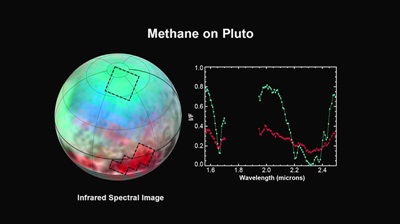 Co-investigator Will Grundy, from the Lowell Observatory in Arizona, added: “We just learned that in the north polar cap, methane ice is diluted in a thick, transparent slab of nitrogen ice resulting in strong absorption of infrared light.”

The 5000-pixel sensor used on Ralph is in fact seven different CCDs made on the same substrate, providing a complete focal plane within a single device.

The second CCD provided by e2v, part of the long-range reconnaissance imager (LORRI), is a 1000x1000 pixel sensor that in combination with a telescopic camera delivers monochrome images and high-resolution geological data.

LORRI was the instrument used to measure Pluto’s diameter, now confirmed as 2370 km. “This result confirms what was already suspected,” reported NASA. “Pluto is larger than all other known solar system objects beyond the orbit of Neptune.”

Confirming the precise size of Pluto has posed a long-standing technical challenge because of the distorting effect of its atmosphere, although whether the result will be enough to see the object restored to the official ranking of “planet” remains to be seen.

He added: “The image sensor in LORRI is very similar to the Navcam image sensor we developed for the Rosetta mission, which has been producing the majority of the incredible images showing the comet gradually getting more active as it gets closer to the sun.”

With New Horizons now beyond Pluto and heading off to investigate more Kuiper-belt objects, astronomers are set to begin analyzing the wealth of images and spectroscopic data that are expected to reveal unprecedented details about the nature of the dwarf planet and its five moons.