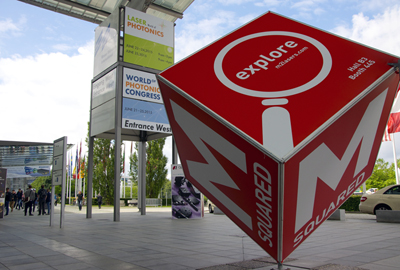 M Squared Lasers, based in Glasgow, UK, has been given an Innovation Award from the Institute of Physics (IOP) for the company’s contribution to laser technology with the development of SolsTiS, a compact and fully automated laser toolkit offering what the company calls an “unprecedented tuning range and unrivalled power”.

SolsTiS is described as a detailed instrument that helps scientists probe deeper into the secrets of fundamental science by providing the ultra-pure light needed in experiments with cold atoms. Before SolsTiS, says M Squared, “light was not pure enough and lasers could not provide the ultra-narrow line-width, low-noise output required to probe complex quantum systems”.

Research into atomic clocks, teleportation demonstrations and antimatter experiments are some examples of where leading researchers around the world are using this breakthrough technology.

Founded in 2006, the company now has more than 150 customers globally, has achieved sales of over £14m and has created 50 full-time jobs in Scotland. Other notable lasers in the M Squared range include: the ECD-X, a compact frequency conversion accessory module that uses resonant enhancement to generate the second or fourth harmonic of CW narrow linewidth lasers; the Sprite, an ultrafast, femtosecond laser source; and the Firefly-IR laser, a pulsed, tunable mid-infrared source, designed for remote sensing and molecular spectroscopy applications.

Frances Saunders, president of the IOP, commented, “Innovations such as the SolsTiS laser kit from M Squared Lasers is a great example of how a business can use the latest advances in physics to satisfy academic and market demand. Many congratulations to the team in Glasgow for their success and making this breakthrough technology available to researchers around the world.”

Dr. Graeme Malcolm OBE, CEO and founder of M Squared Lasers, said, "By rethinking the underlying physics of the traditional laser and investing over 165 man-years into the development of a best in class system, SolsTiS represents a complete step change in laser technology. We are delighted and honored to receive an IOP Innovation Award.” M Squared Lasers will be showcasing its innovation at a parliamentary reception on 28 October and will also be attending an IOP awards ceremony in London on 5 November.

The IOP Innovation Awards are described as "a unique celebration of commercial success built on physics". Other sensing, scanning and photonics sector winners, this year, include:

Awarded: M Squared Lasers' SolsTiS laser has been acknowledged by the Institute of Physics.