'Virtual lab' to specialize in development of ultra-high-efficiency photovoltaic devices for both CPV and consumer use. 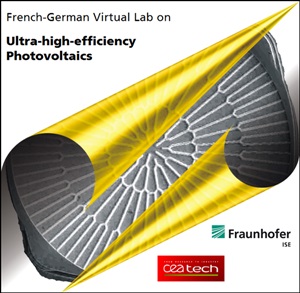 Two of the world’s leading research centers for high-efficiency solar cells are joining forces to establish what they call a “virtual lab” focused on the development of new products for the PV market.

The two research institutes, both of which have set recent record-breaking results for research-grade solar cell conversion efficiencies, formally signed a collaboration agreement in May, marking the official launch of the joint laboratory.

Close to industry
The institutes are stressing that their research work will operate at a level close to industry, with Signamarcheix saying: “We strongly believe that the collaboration between Fraunhofer ISE and CEA Tech will result in the best possible research offering for industry.”

Baudrit added: “Our aim is to develop new products in order to give European industry a competitive edge that ensures future success in the renewable energy markets.”

Recent years have seen what was a nascent CPV industry decimated by the rapid drop in cost of rival silicon solar cell technology, a trend that has even seen the French semiconductor materials company Soitec – a close collaborator of both Fraunhofer ISE and CEA Tech – exit the CPV systems market.

However, the multi-junction devices based on compound semiconductor materials that are used in the cells that power satellites and state-of-the-art CPV systems still represent the most efficient way to convert sunlight into electricity. The 46 per cent mark set late last year by a team involving Soitec, Fraunhofer ISE and CEA Tech currently tops the US National Renewable Energy Laboratory (NREL) chart of the best-performing research-level cells in terms of efficiency.

Consumer devices targeted
The “virtual lab” collaboration will not just be working on CPV though. According to a release from Fraunhofer ISE, its target markets will also include solar cells developed specifically for consumer devices and the partners expect industrial collaboration to contribute “significantly” to financing the new joint effort.

Although Soitec has found a Chinese buyer for its heavily loss-making CPV systems business, as a developer of advanced semiconductor materials and manufacturing processes it is still working on some of the fundamental technology behind the CPV approach.

And the Paris-listed firm announced just last week that quadruple-junction solar cells produced with its proprietary “SmartCell” manufacturing process were behind a brand new PV module efficiency record of 38.9 per cent.

The module, tested by Fraunhofer ISE, uses 36 Fresnel lenses as well as secondary optical elements to achieve the record-breaking performance.

“Indeed, it opens many business opportunities in different kinds of industries for Soitec. In the present case, the SmartCell paves the way for further cost reductions in solar energy, as it can be integrated in a record-efficiency CPV module suitable for mass production.”