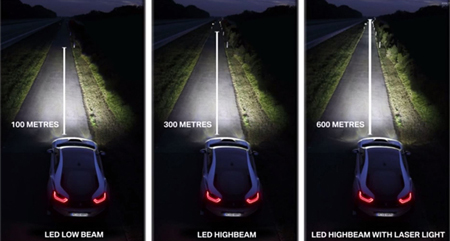 Innovative diode laser designs i.e. those based on dense spectral beam combining as well as the diode manufacturing technology suggest this technology has the potential to enable applications, which have previously been dominated by solid state lasers.

In a series of talks yesterday in Hall B3 of the Laser expo, systems developers and intergators discussed the latest in high power diode lasers, including edge emitters and vertical emitters.

Hying told the audience, “There is now demand for the highest luminance in various markets and applications, such as automotive, where the design trend is towards headlamp miniaturization and the creation of signature designs, so there is a need for smaller optics. Another driving force is the growing demand for longer range high beams."

Another factor driving this technology is in the projection market, where solid sate sources are offering a route to lower étendue [spread] of the light. LED luminance in automotive applications has now matched the High Intensity Discharge bulb level; the luminance of the state-of-the-art LED and HID systems is close to 100cd/mm2. 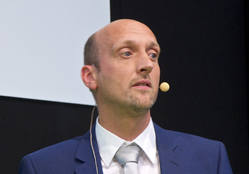 LARP stands for Laser Activated Remote Phosphor. Hying explained, “The basic principle is that we have a blue diode laser as the principle source, emitting at 480nm. We collimate the beam onto a ceramic phosphor plate, which converts part of the light into yellow light, so on the other side of the converter there is a mix of blue and yellow light which produces a fine white light or other colours if desired.

“By adjusting the conversion ratio of the blue and yellow in different ways it is possible to create a wide range of colors . Phosphor converters are available for a variety of target colors including red, green and yellow; the converters are typically cerium-doped YAG phosphor converters which offers conversion efficiency up to 190lm/W. The main challenge in optimizing this system is achieving optimal thermal conductivity of elements including the converter, substrate, interface substrate and heatsink, and even the phosphor attach glue.”

In the car headlamp application of LARP, there can be either a single or multiple laser approach, being based, respectively, on a single or multiples of a 1.6W TO56 laser diode. Osram has developed with BMW a headlamp prototype featuring six single laser modules to provide the high beam illumination.

Hying concluded, “On a technical basis, LARP technology offers unbeatable luminance, up to factor of seven times the state-of-the-art alternative lighting sources. Current car projects include the introduction of a new category of long-range, high beam functions powered by our LARP light sources.”