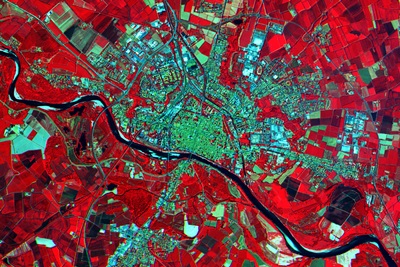 High-resolution multispectral images captured by the optical sensors on board the Sentinel-2A satellite launched last week are already being beamed back to Earth – yielding views with unprecedented spectral detail and resolution.

The European Space Agency (ESA) payload, one of several that will eventually make up the “Copernicus” constellation, covers 13 discrete bands across the visible and near-infrared spectral regions and combines that with a 290 km swath width and a ground resolution of 10 meters per pixel.

Sentinel-2A’s first image acquisition captured a view extending from Sweden to Algeria, through a large chunk of central Europe. It included a close-up the Po Valley in Italy, processed through the satellite’s high-resolution infrared channel. The French company Sofradir provided 12 infrared sensors for Sentinel-2A.

Although the imager must now undergo around a three-month period of calibration, ESA says that the quality of these first images already exceeds expectations. Next year should see the launch of the Sentinel-2B partner satellite, for which Sofradir has also provided 12 short-wave infrared (SWIR) sensors.

Volker Liebig, the director of ESA’s Earth observation programs, said: “Sentinel-2 will enable us to provide data for the program’s land monitoring services and will be the base for a wide spectrum of applications reaching from agriculture to forestry, environmental monitoring to urban planning.”

Philippe Brunet, director for space policy and defense, including the Copernicus mission, at the European Commission, added: “This new satellite will be a game-changer in Earth observation for Europe and for the European Copernicus program.”

Spectral and spatial detail
ESA claims that the imager’s 13 spectral bands will take remote land monitoring to an “unprecedented” level. “Sentinel-2 is the first optical Earth observation mission of its kind to include three bands in the ‘red edge’, which provide key information on the state of vegetation,” says the agency.

That level of spectral detail can provide critical information regarding crop health, something that would be particularly important in the lower Po Valley. According to National Geographic, it features some of the most heavily cultivated land in Europe, but also suffers from illegal gouging of sand and gravel used for construction.

Now armed with an optical satellite imager that has already shown itself capable of pinpointing individual buildings in nearby Milan, authorities should be able to identify any such damaging activity in rapid fashion.

e2v technologies, the UK-based maker of CMOS imaging sensors, is also closely involved in the Copernicus program. Its devices are set to be used in five out of the six Sentinel satellite missions - including 2A - and its president of space imaging Matt Perkins said:

“Just four days after launch, Sentinel-2A has captured its first images of Earth. Here at e2v we are proud of the part we have played in Sentinel-2A, which has enabled it to capture these amazing images.”

Sofradir said that the satellite is using its large-format SWIR sensors, described by the firm as highly complex devices. “Sofradir is the sole European manufacturer to have its infrared detectors deployed in space,” claims the firm.

Its €6.7 million deal to provide the 15 µm-pitch mercury cadmium telluride (MCT) detectors for satellite builder and prime contractor Astrium SAS was extended by €2.5 million in early 2010.

As well as featuring photonics innovation in its imaging capability, the Sentinel missions are also equipped with high-speed laser links to ensure that the data-rich images can be sent and shared quickly.

ESA said that early results suggest that the data processing and transfer aspects of the mission are also working well, paving the way for the planned systematic dissemination of imagery in the future.