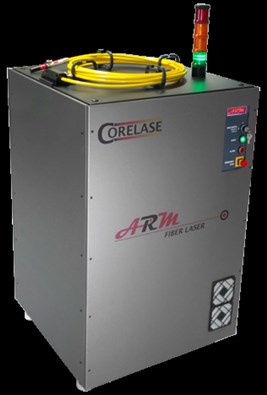 The new “ARM” system promises not just high power. Corelase says that it will enable “a new era” for fiber laser materials processing, thanks to its highly adaptable design. “ARM” stands for adjustable ring mode, and can be used to alter the laser beam’s power profile on the fly.

Based on the firm’s proprietary all-fiber technology, that feature could offer customers the option of buying a single, universal laser tool to perform tasks that would currently require several different ones.

Back reflectance
According to Corelase, one of the key benefits of the design is its suitability for processing any kind of metal, regardless of its reflectivity – more reflective metals like copper and aluminum can cause problems with conventional laser processing systems.

“ARM is equipped with five-step back reflection resistance system,” writes the Tampere company. “It enables processing of sensitive and tough materials with outstanding protection against back-reflection caused by processing highly reflective materials.”

The beam-shape flexibility and inherent versatility of the system means that it can be used for laser additive manufacturing as well as for more traditional applications like welding, cutting and drilling, adds the firm.

A Corelase product information sheet suggests that a power output of up to 6 kW is possible at the inner spot, with 8 kW at the outer ring. However, the standard specification would offer a combined power of 8 kW in total, for example 4 kW at both the inner spot and outer ring, or 6 kW from one and 2 kW from the other.

Rofin's 40th
Options for the water-cooled system include external optics from Swedish firm Optoskand, and visitors to the trade show at Messe München next week will be able to see the new laser for themselves – along with Corelase fiber laser modules and the firm’s “X-LASE” picosecond system - at booth 223 in Hall A3.

Meanwhile parent company Rofin, traditionally one of the largest Munich exhibitors alongside its rival Trumpf, will be celebrating its 40th year in the business (and Günther Braun's last as CEO) with an 8 kW fiber laser also making a debut on its booth. The system is based on Rofin’s third generation of fiber laser modules, said to offer a more cost-effective design that ought to see the company compete better with fiber laser specialist IPG Photonics.

• Also showing off new industrial fiber lasers in Munich will be Laser 2000, courtesy of its recent distribution deal with US firm JDSU. The Laser 2000 booth will feature both the Corelight “AJ” fiber laser series, which offer an output of up to 6.3 kW at 1080 nm, and direct-diode lasers offering up to 4.2 kW at 930 nm.