Seattle start-up offering laser cutting and engraving in the home attracts $9M series A round. 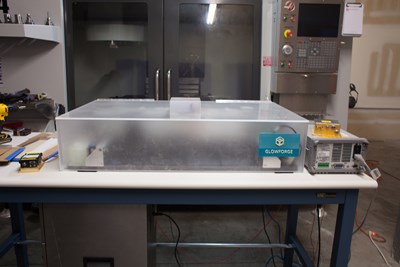 What's in the box?

Glowforge, a US start-up founded by software entrepreneurs, is hopeful of bringing laser cutting technology to the mass market after raising $9 million in series A venture funding.

The Seattle firm is touting itself as the next big thing in 3D printing, but actually working on a system for laser subtractive manufacturing, for applications like sculpting wood, shaping leather, and even cutting seaweed.

Incorporated just last year, Glowforge is yet to release any products. Its web site shows one image purporting to be a prototype laser cutting system (see above), albeit hidden inside what looks to be an opaque perspex box.

In the series A round, they were backed by the Californian venture companies Foundry Group and True Ventures, as well as some of the key early players involved in consumer 3D printing kit vendor MakerBot. Two former MakerBot CEOs – namely Jenny Lawton and co-founder Bre Pettis – are said to have invested.

Glowforge says that its 3D laser “printer” will be available for purchase in late 2015 for less than $2,500, although it’s not yet clear exactly what kind of laser source will be inside the box, or who is providing it. The firm’s representatives did not respond to enquiries about the technology from optics.org.

“Oven-sized behemoths”
In a recent blog post on its own web site, Glowforge offered few clues. Bizarrely, it wrote: “Laser fabrication went out of vogue in the 80s. Lasers still have a place in factories, but lasers of today look pretty much like lasers of twenty years ago – oven-sized behemoths with Windows 95 era software.”

While that suggests the Glowforge team has overlooked 20 years of extraordinary developments in laser materials processing systems and applications that has seen the technology implemented in making everything from jet engines to jewelry, it does to some degree reflect the very industrial nature of most laser deployments.

The firm claims that by “sprinkling” the laser with devices such as cameras and accelerometers, and incorporating cloud-based software, it will be able to make such laser systems cheaper, more capable, and easier to use. However, exactly what kind of wavelength, power level or pulse characteristics these laser systems will have – not to mention the regulatory requirements – is not made clear.

“The first time I used a laser it was to prototype Robot Turtles, the best-selling board game in Kickstarter history,” said Shapiro. “The technology was powerful, but atrociously difficult to use.”

What’s in the box?
Earlier this year the CEO told the New York Times that Glowforge would change all that: “We’re able to give creators a power tool that they’ve never experienced before,” he said. “You can design something beautiful, hit the button once and have something amazing and personal that’s unique to you.”

Shapiro added: “Hit the button ten times and suddenly you’ve got presents for all your friends; hit the button one hundred times and now you have a small business.”

Glowforge claims that its commercial laser cutters will be able to create products in wood, leather, cloth, plastic, foam, cardboard, and paper, allowing users to produce things like lamps, satchels, scrapbook pages, wallets, pop-up birthday cards, and belts, or to engrave pictures on anything from a slab of granite to an iPhone.

In that New York Times video, Shapiro opens up a plastic-looking box to reveal what appears to be a conventional laser source, a couple of mounted mirrors – and not much besides.

The firm says it plans to use the new funding to grow its team in Seattle, where it is hiring mechanical, electrical and software engineers.