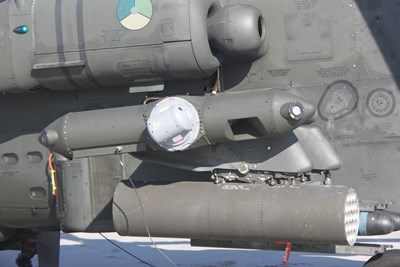 Northrop Grumman says it has received a $111 million order from the US Air Force to provide updated hardware and support for the Large Aircraft Infrared Countermeasure (LAIRCM) system.

The award represents the latest modification to a long-standing relationship between the giant US defense contractor and its domestic military customer. LAIRCM automatically detects a missile launch, determines if it is a threat and activates a high-intensity laser-based countermeasure system to track and defeat an incoming missile.

Under the terms of the latest contract, Northrop Grumman will deliver additional transmitters, missile warning sensors, processors, lasers, control interface units and supporting equipment to the Air Force and various customers around the globe through April 2017. The firm says that in addition to legacy hardware, the delivery will include a modernized control interface unit replacement.

Full-rate production
The firm says that its various IR countermeasure systems are now installed or scheduled for installation on more than 1000 military aircraft around the world, on board 55 different types of large fixed-wing planes and helicopters.

“The mature, reliable technology has been incorporated in more than 3250 pointer/trackers that are now in full-rate production to protect these aircraft, supporting more than 1 million hours of theatre operation,” it added.

As well as the more mature LAIRCM systems, Northrop Grumman is closely involved in the development of smaller and more advanced countermeasure systems based on mid-infrared quantum cascade laser (QCL) sources.

However, a market report published earlier this year by analysts at Frost & Sullivan suggested that the market for IR countermeasures would grow at only 3 per cent per year to reach about $560 million in 2019 – despite the technological innovation that is making the systems more compact and suitable for a much wider range of aircraft.

That’s because defense budgets are, in general, under pressure from governments globally, with fewer purchases of military aircraft in India, for example.

Another factor identified as an issue by Frost & Sullivan is the relative lack of competitors providing IRCMs. Because they are largely restricted to a handful of the major US-based defense contractors, in collaboration with a few specialist component suppliers, this ultimately drives up their cost.

Among the market report’s recommendations is a call for more investment in IRCMs for medium- and heavy-lift helicopters, where there is seen to be a more compelling case to install the technology.