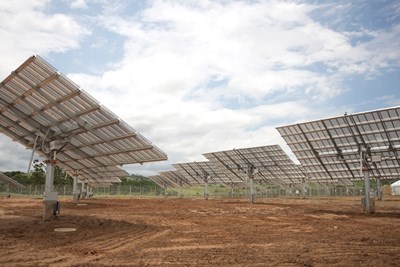 Soitec says it has found a buyer for the loss-generating concentrated photovoltaics (CPV) business unit it put up for sale earlier this year.

The France-headquartered company, which will now re-focus on its core business of developing advanced electronic materials and manufacturing processes, announced an agreement with little-known CPV firm ConcenSolar.

ConcenSolar is said by Soitec to be a business partner of China-based Suncore Photovoltaic Technology Co. Ltd., which was created back in 2010 as a CPV joint venture between US company Emcore and San’an Optoelectronics.

The two parties did not disclose the cost of the Soitec Solar transaction, but it is unlikely to be anywhere near the approximate €400 million that the company reckons it has invested in the CPV business since acquiring Concentrix Solar in late 2009 for an estimated $50 million.

A spin-out from the world-leading Fraunhofer Institute for Solar Energy Systems (ISE) in Freiburg, the Concentrix business arrived with exemplary technology credentials and prospects for CPV deployments in sunny regions.

But since then market forces in the world of solar photovoltaics have made life difficult for everybody in the CPV business, and the sector has failed to live up to the projections made before the collapse in the cost of conventional crystalline silicon cells and modules.

On the plus side, Soitec’s investment – allied with the French company’s own “Smart Cut” processing technology for advanced electronic materials - has pushed the performance of multi-junction cells to new highs.

Raising the efficiency bar
The Soitec team has consistently raised the bar on conversion efficiency in recent years, and currently sits at the very top of the charts with a verified performance at 46 per cent - more than twice the efficiency of the best commercial cells based on silicon or thin-film materials.

However, that undoubted expertise has counted for little as CPV has been squeezed out of all but a handful of major utility-scale solar farm deployments. Soitec's main success has been in South Africa, while a major question mark now hangs over the future of its CPV module production facility in San Diego.

In a Soitec announcement, ConcenSolar CEO Charlie Wang was quoted as saying: “Soitec`s CPV solar modules represent the most advanced technology with proven reliability and project bankability, as well as competitive cost structure due to production automation and high-efficiency performance.

"Combining our experience of solar project development and financing capability from our established financing partners, this acquisition further strengthens our position to provide the most cost-effective solar power solutions for our utility-scale customers."

Whether ConcenSolar will enjoy any success in a business that has gobbled up investor cash in recent years remains to be seen – although with Suncore now fully owned by San’an, China’s largest LED chip manufacturer, there is the potential for more cost-effective volume production of the multi-junction cells that sit at the heart of CPV systems.

Suncore says that it began manufacturing such devices on a fully automated production line in 2012, and that it completed a 50 MW CPV power station in Golmud, western China, the same year.

• More details about the deal may be released when Soitec announces its latest financial results on May 28.