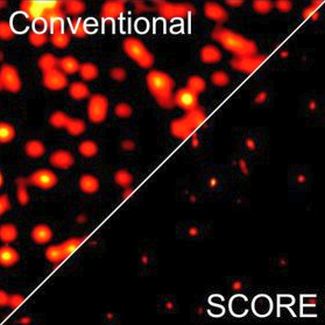 Putting scatter to good use

Scattered light is often an unwelcome hindrance in imaging operations, but under the correct circumstances it can be put to good use.

Along with several other approaches to increasing the resolution of imaging techniques, such as the Nobel Prize-winning field of super-resolution microscopy, the careful use of a scattering medium has already been shown to enhance spatial resolution of light waves - under the right conditions.

One proven approach has involved speckle correlation techniques, in which speckle patterns produced under different coherent illuminations are computationally compared in order to yield visual information about the object being illuminated.

Tilting the incident beam through an angle related to both the wavelength of the light and the thickness of a scattering medium has already yielded images of microscopic objects hidden behind that medium.

Now a team at the University of Twente has demonstrated speckle correlation resolution enhancement (SCORE), a new fluorescence imaging method that enhances microscope resolution by using a high-index scattering medium as an imaging lens. The work was published in Optica.

Combined with a new image reconstruction algorithm developed specifically for the purpose, SCORE proved capable of collecting two-dimensional fluorescence images of 100 nm diameter nanospheres, and demonstrated a deconvolved resolution of 116 nm in a 10×10 micron field-of-view.

"Our method is the first application of a high-NA scattering lens for wide-field fluorescence microscopy," commented Twente's Hasan Yilmaz. "High-resolution imaging using such a lens was previously demonstrated in our group, but that was for a narrow field-of-view due to a limited spatial range of speckle correlations. Here we developed a parallel imaging procedure, combining the high-resolution of a high-NA scattering lens with the wide field-of-view of conventional detection optics."

At the heart of the apparatus was the scattering lens itself, a 400-micron-thick gallium phosphide (GaP) structure with one polished side and a scattering layer, two microns deep, electrochemically etched onto the opposite surface. For the purposes of the team's experiment, the fluorescent nanospheres to be imaged were themselves fixed to the polished side of the lens by drop-casting.

Illumination of the scattering surface with a 561 nm source generated a speckle pattern, while tilting the incident beam served to scan the pattern across the nanosphere samples. The team's algorithm then processed the fluorescence images from several angles of incidence, to reconstruct a wide-field image with resolution equivalent to the average speckle grain size.

"Previous scattering-lens-based microscopy operations have used wavefront shaping," said Yilmaz. "Advances in computer algorithms have made it possible to reconstruct a fluorescent object without that operation, although the field-of-view is in turn limited by speckle correlation range. Here we can use the wide-field image information of the standard-resolution detection optics to reconstruct high-resolution, wide-field images."

The benefits of scatter
Apart from the specialized GaP scattering lens, the hardware used in the imaging system was entirely standard. The data processing, however, involved a new iterative algorithm, a novel variant of the standard computational tools which duly proved very effective compared to previous phase retrieval operations.

It ultimately revealed the shape, position, and orientation of the objects, said by the team to be a major improvement over previous approaches that can yield a target's shape, but not necessarily indicate its position or orientation.

"The most significant challenge involved the development of this reconstruction algorithm," noted Yilmaz. "It took time to optimize all the parameters, and we borrowed ideas from the signal processing community during the development process."

Once the scattering illumination operation and the new algorithm were successfully implemented, the SCORE technique enabled a resolution of 116 nm - slightly better than the 120 nm produced by structured illumination microscopy (SIM) techniques, according to Yilmaz.

"Super-resolution techniques such as STED, STORM and PALM enable higher resolution, but they impose stringent requirements on the photophysics of specific types of dyes," he said. "Our method works with any type of dye, as in SIM. But whereas SIM uses information from both illumination and detection operations to enhance resolution, SCORE uses only illumination information. This makes it much more robust to any mechanical drifts during measurements."

The main disadvantage at present is the need to take multiple pictures, slowing the overall procedure down; faster and more sensitive cameras should help here, and the project's next steps are focused on ways to increase both resolution and speed. But even in its initial implementation, SCORE has provided what the team describes as remarkable resolution under ambient conditions, opening up a route to enhanced resolution in various scenarios.

Another consequence may be improved resolution of wide-field picture cameras in general, since the project's new algorithm could be easily applied to wide-field image reconstruction based on conventional imaging methods too.

"Our method is still a lab-bench platform at present, but there are several ideas here that can be directly translated into applications," said Yilmaz. "Scattering lenses are very cheap compared to expensive microscope objectives, and can enable aberration-free high-resolution images. I think it is time to start attaching scattering lenses to conventional microscopes."