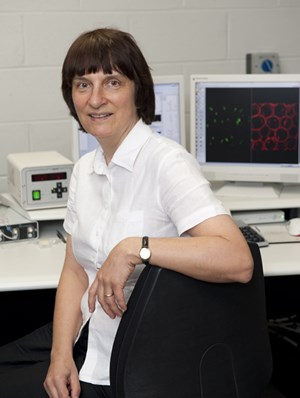 A research team in Australia says it has demonstrated that smart phones can be reconfigured as portable bioanalytical devices capable of delivering clinically relevant results.

Ewa Goldys and colleagues from the Centre for Nanoscale BioPhotonics (CNBP) at Macquarie University in Sydney have just published their results in the open access journal Sensors, and claim in that paper that the approach can provide “immediate” diagnosis of diseases including rheumatoid arthritis, cystic fibrosis, and acute pancreatitis.

Goldys, who has previously presented at various SPIE conferences, explained: “In this instance, the process involved the successful testing of biological samples for levels of trypsin and collagenase, clinically relevant biomarkers found in high concentration in many human diseases.”

In the CNBP experimental setup, the samples were placed between a tablet device that provided excitation light, and a polarizer to separate the tablet illumination from the fluorescent biomarker emission. “This was then photographed by the smartphone, with the result obtained by analyzing the color and intensity of the image pixels,” Goldys said.

Point-of-care diagnostics
Because of the ubiquity of smart phones and tablets, the CNBP researchers believe that the approach has enormous potential for use in point-of-care medical diagnostics - particularly in remote or developing areas where professional and expensive research laboratory equipment is scarce.

They are among a growing number of research teams working on such low-cost and widely deployable optical systems based on consumer electronic devices, with notable others including the University of California, Los Angeles (UCLA) group led by Aydogan Ozcan.

Goldys added: “This type of fluorescent testing can be carried out by a variety of devices but in most cases the readout requires professional research laboratory equipment, which costs many tens of thousands of dollars. There is a need to develop easy to use, portable and affordable systems, as this is preferred for point-of-care applications.”

Biosensing app available in June
The Macquarie researchers have also been developing a biosensing app for smart phones that is scheduled to become available for free download from June 15. It promises to convert smart phones into assay readout devices similar in principle to a clinical plate reader.

Goldys, who expects to see rapid uptake of smart phone technology for biomedical diagnostics, said that the approach was simple: “What we’ve done is develop a device with a minimal number of commonly available components. Specialized software is not required and setting up the standard commercial tablet and smartphone is very straightforward. The results can be analysed by simply taking an image and the readout is available immediately.”

Going into the details of the CNBP approach in more detail in their paper, the researchers explain that they carried out two types of assays with the smart phone kit, detecting the enzymes collagenase and trypsin. They used fluorescein as the fluorescent biomarker.

The two enzymes are important: monitoring of trypsin levels is common in new-born babies, as increased levels can be an indicator for cystic fibrosis. Those suffering from the disease have a deficiency in the transport of trypsin and other digestive enzymes that are produced in the pancreas.

Detection limits
In the discussion section of their paper, the CNBP team reports that a typical trypsin level for a healthy child below one year of age is less than 200 µg/l. Levels of 200-1000 µg/l are an indication for more tests.

“The detection range of interest for cystic fibrosis application is between 200 ng/ml and 1800 ng/ml,” they report. “With our low detection limit of 3.72 ng/mL the smart phone device is over 50 times more sensitive than what is required for the detection of cystic fibrosis."

For trypsin, the detection limit was 930 pg, which compares with around 400 pg for a microplate assay. “The device is sensitive enough to be used in point-of-care medical diagnostics of clinically relevant conditions, including arthritis, cystic fibrosis and acute pancreatitis,” concluded the CNBP researchers.

Clinically relevant
In the experiments the CNBP setup also showed itself to be capable of detecting collagenase with a lowest measured concentration of 3.75 µg/ml - and 0.938 µg in total. As a result, the technique is said to deliver results comparable to those obtained by a conventional microplate reader.

Crucially, they add, the technology is largely platform-independent, with Apple and Android devices equally suited to the task. “The key parameters determining their suitability are screen brightness, color [gamut] and polarization of the screen,” the team reports.

However, some devices will need some adaptation. “The screens in some mobile devices (such as iPads) produce light polarized at a 45-degree angle, so the polarizer needs to be set properly for the excitation light to be fully extinguished,” Goldys and colleagues explain. “If the screen is not polarized, or insufficiently polarized, then two polarizers should be used.”

• To download the free biosensing app for smart phones from June 15, visit this CNBP web page.