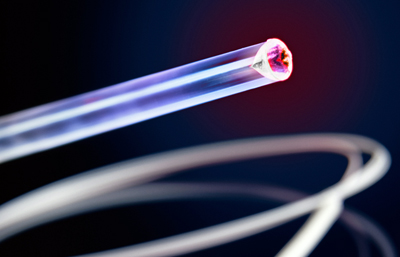 You're so vein: laser-treated optical fibers can be inserted into even smaller veins.

Modern medicine relies on optical fibers to cauterize unhealthy veins in a minimally invasive way. Now, researchers at the Fraunhofer Institute for Reliability and Microintegration (IZM) have developed a laser processing method that enables automated manufacture of these special fibers at a much higher quality than previously possible.

The scientists are to present a fiber probe prototype manufactured using the new technique between May 19-21 at the measurement fair SENSOR+TEST 2015 in Nuremberg, Germany.

Venous disease is fairly widespread in Germany: According to the German Venous League, one in five German women and one in six men suffer from varicose veins, thrombosis or other vein problems. Endovenous laser vein therapy is one remedy. For this procedure, a plastic-coated optical fiber 0.5mm in diameter is inserted into the affected blood vessel. Laser light is conducted through the fiber to the tip.

At a temperature of several hundred degrees (C), the laser light cauterizes the tissue and causes the veins to collapse. To ensure that the light strikes the sidewalls of the vein directly, the fiber tip is tapered with a cone-shaped indentation that forms a reflective surface for the laser light. A protective glass cap ensures that no blood deposits directly on the tip could change the optical characteristics of the laser light. The cap also protects the patient from any injury from the fiber tip.

In the LaserDELight project, researchers at the Fraunhofer IZM have developed a laser-based process for precisely shaping this sort of optical fiber. They use the FiberTurningLaser, which is a laser for glass processing. “The method enables the first automated series production,” explains Dr. Henning Schröder from Fraunhofer IZM.

Until now, producing the fibers required complicated mechanical and manual processes that not only took significantly longer, but cost more too. “What’s more, replicating a suitable product is extremely difficult,” adds Schröder. Automation ensures consistent high quality. The project is being funded by the German Federal Ministry of Education and Research, the BMBF.

Optical fiber tip inside the probe

Using a laser beam, the researchers can shape the optical fiber tip. In a later production step, the protective cap is fused onto the fiber so that no additional fixture is needed. “The new process has demonstrated that it is more practical to fashion a cone-shaped indentation in the fiber than have a tapered shape like the tip of a pencil,” explains Schröder.

This offers yet another advantage: the cap on the fiber end is smaller because the tip of the cone is eliminated, making the fiber probe head in general more compact and versatile. Now, it can be inserted into even smaller vein branches.

With help from laser technology, the scientists are trying to achieve even finer dimensions, which can no longer be produced by hand: the goal is optical fibers with a diameter of only 100-200 micrometers. These could open up new applications in the area of optical sensors, for instance as micro optics for visible light communication (VLC) – a technology for optical data transmission. To put it simply, for VLC, the process is the reverse of the endovenous laser procedure.

“The fiber tip collects data from the environment and sends it back through the fiber to a detector,” Schröder explains. This detector – a photodiode or CMOS chip – converts the optical information into electrical signals for evaluation.