Momentum in laser and photonics divisions as the US firm looks to re-tool its manufacturing lines. 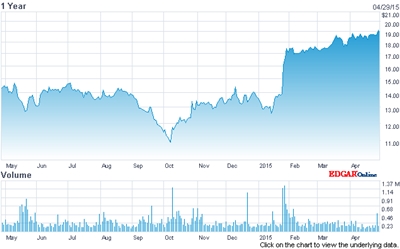 II-VI, the diversified materials and components company that sells a wide range of laser and photonics products, has reported higher sales and orders following last year’s restructuring into three divisions.

Only II-VI’s “performance products” division reported a fall in sales, with the laser products division standing out as by far the most profitable element of the business as the company just beat its quarterly sales and earnings guidance.

CEO Francis Kramer described the opening three months of calendar 2015 as “solid”, adding that the Laser Enterprise wafer fabrication facility in Switzerland was now operating more consistently. “We expect this to drive synergies at other divisions,” Kramer said.

He added: “Several next-generation laser diode products are in the various stages of development and qualification that target near-term and longer-term growth opportunities. We have started an aggressive plan to add capacity, re-tool our manufacturing lines through increased automation, and increase our yields.”

“Our EUV customer continues to take as much product as we can currently deliver,” he said.

Fiber laser hedge
In previous years zinc selenide optics for carbon dioxide lasers have been something of a cash-cow for II-VI, and despite the wider industry adoption of fiber sources in place of the more traditional gas-based infrared lasers Mattera pointed to a 13 per cent year-on-year increase in sales of optics for low-power CO2 lasers, and added that the high-power CO2 segment remained solid.

II-VI has to some degree hedged its bets in the industrial laser sector, with its HIGHYAG Lasertechnologie and AOFR sub-brands both supplying key components used in fiber laser optical systems.

And while the latest quarter included a write-off of the AOFR and Aegis trade names that II-VI acquired back in 2011, Mattera stressed that the “good technologies” associated with those two brand names would still be utilized in fiber laser and other applications.

Elsewhere in the business, II-VI continues to restructure its optical communications group – which includes some elements of the Oclaro business acquired in late 2013. Revealing a charge of $2.9 million in the latest quarter for that action, Mattera said: “We’re streamlining the number of locations and aligning similar types of work together.”

Overall, II-VI reported net earnings of $14.5 million on revenues of $182.7 million. With quarterly bookings also climbing to $195.7 million, the company’s executive team is expecting to deliver sales of between $185 million and $193 million in the current quarter.

And although that did little to move the needle on the II-VI stock price, the company is trading significantly higher than a year ago, when it was still battling to integrate the various elements of the former Oclaro business.