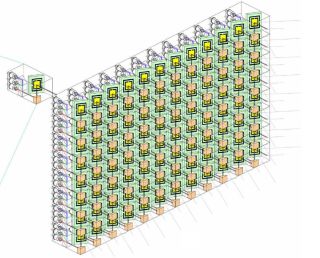 The biggest problem with 3D displays for many people is the need for suitable glasses in order to perceive the effect, so several potential ways to do without the eyewear have been investigated in recent years.

Unfortunately all such autostereoscopic 3D displays to date have proven to have significant drawbacks. Lenticular lenses, optical gratings or micro-lens arrays can be incorporated into displays so as to present each eye with a suitably distinct picture; but always at the cost of image depth, viewing angle or general quality of image.

It employs what developer Hongen Liao calls a light homogeneous emitting (LHE) approach based around MEMS scanning units, and the prototype is said to be the first autostereoscopic system to create animated 3D images with a perceived image depth of six meters. The results were published in Nature's Scientific Reports.

The new system generates its 3D images by driving multiple LHE MEMS scanning units, each of which acts as an elemental pixel in the display. Once correctly calibrated, light from each MEMS unit is directed to a predetermined area in space so as to spatially format a 3D image for a viewer in that location. The scanning action of the MEMS units allows them to deliver appropriately different images to different locations, matching the viewer's position relative to the display.

"In our prototype, we used a row of 16 MEMS scanning units - a 1D orientation - to demonstrate our ideas," said Liao. "With a single row of MEMS units, we can only display 3D-space images with the same number of pixels as there are units observed from one viewpoint. To extend the image we transformed the 1D arrays into effectively 2D arrays with a multi-mirror system, allowing the viewer to observe the 3D-space images. We are now constructing a 2D array of MEMS units, to achieve the 3D-space images without using the multi-mirror array."

A fantastic result
Testing the motion parallax and viewing depth that the system could deliver involved positioning real-world markers at different distances from the viewer, and observing how they correlated with the display as the viewing perspective changed.

Although initial trials involved the display of relatively simple geometric shapes, an image depth of six meters was described in the paper as a "fantastic result compared with the original screen width of only about 19 cm."

Employing a larger number of LHE MEMS scanning units and enhanced precision calibration of the light rays could extend this image depth even further in the future, although as Liao noted the performance and behavior of the MEMS scanning units is the system's most critical parameter and the key to success.

"We used custom-made MEMS units in our prototype LHE 3D display; but for the system to be put into commercial or industrial use, we do need the MEMS fabrication to become more compact, allowing real 3D images with high spatial and temporal resolution to become a reality," he said. "Digital micromirror device (DMD) fabrication and related technology could be used to make MEMS units in the future."

Such advances should improve both the image quality, which is mainly limited by the size of the MEMS units, and the physical dimensions of the overall system.

Opening the bottleneck
This new approach to autostereoscopic displays has been under development for a while; Liao said that the concept of a MEMS-scanning approach was proposed in 2010, and has been patented. Static 3D images were first generated in 2012, with animated images following in 2013.

Improvements in size and scalability should now follow through further integration of light sources, colorization units and MEMS scanning mirrors. Further increases to the perceived image depth is also a goal - potentially to more than ten meters.

Liao envisages building a multi-mode display that includes 2D, binocular, multi-view and integral 3D imaging, by adjusting the MEMS scanning modes of the mirror and controlling the inputted signals accordingly. Applications in image display along with other information and communication fields could then follow.

"We are looking forward to cooperation with potential display makers, such as DLP and laser projector manufacturers, for the future development of this LHE 3D display technology," he commented. "We believe that this technology opens up the 3D display bottleneck for glasses-free autostereoscopic imaging, and makes it possible to revolutionize the different forms of 3D naked-eye displays and 3D TVs."

• Videos of the display in operation are viewable at the Nature Scientific Reports site. An additional animation is available from Tsinghua University.