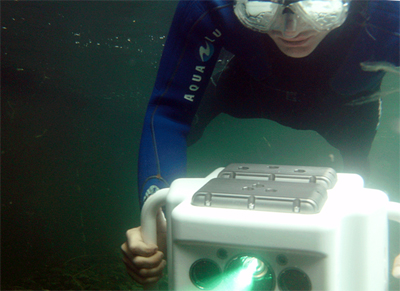 Maintenance of underwater technical systems is usually a challenging and expensive. Pipes, flanges and connections of conveying systems for oil and gas at sea, for example, must first be measured to assess the extent of any damage caused by corrosion, for instance, before repairs – which then need to be assessed.

The Fraunhofer Institute for Applied Optics and Precision Engineering (IOF) in Jena, Germany, has this week presented a system at this week's Hannover Fair, which measures underwater components and provides this information as 3D data.

The sensor and camera technology has approximately the size of a shoe box and can be held by a diver just like an underwater camera. It is currently designed for use at a water depth up to 40m. The prototype was created within an international research project together with 4H Jena Engineering, which developed the housing and the system cladding.

Another key partner was the Norwegian Research Institute Christian Michelsen Research (CMR), which was responsible for the integration of additional sensors into the camera system. The Thuringia Landesentwicklungsgesellschaft (state development company) was the promoter.

Kühmstedt said, “Under water, typically such systems are ten times more expensive than for dry operations. Therefore it is a much larger cost consideration for energy and raw material-conveying companies to maintain their systems for use at sea.

”The underlying problem that the development team identified is that the measurement technologies currently available for undersea component maintenance are either too slow or have to operate too far away from the actual application. This is why we have developed this prototype together with the industry. In the next phase, we want to optimize this 3D measurement system for greater depths and broader underwater application fields,” commented Dr. Peter Kühmstedt, development scientist at the IOF.

During the development project, the IOF was responsible for making 3D measurement technology suitable for underwater use. Kühmstedt described the project’s highlight thus: “We have managed to accommodate the entire control system and electronics as well as the computer and display technology inside a very confined space. The system is no larger than 20 cubic decimeters and it weighs less than 11 kg [1220 in3 / 25lb]”.

Despite its relatively complex technology the underwater 3D scanner must still be easy to operate, because divers are limited in their movements by the water and their equipment. The researchers have adapted the operating and representation software of the system to ensure this, with only a few buttons facing outwards.

Light conditions also differ from those on land: there are significant optical refractions at the interface between the device and the water. Consequently, a special calibration strategy for the measurements compensates for that. A further drawback the IOF team identified is that underwater, communications must run via wires and not radio links; the team needed to design the cables to be compact around the system.

The 3D measurement system successively depicts several striped patterns onto the surface of the component to be examined by means of a projector, while at the same time taking pictures of the object are taken with two cameras.

Based on the series of stereo photos taken and on the active pattern structure seen on the surface, the technology is able to exactly determine the shape of the object. The diver requires 0.2s to perform each 3D scan but he/she is able to immediately check under water whether they are usable.

Once back on land or on the ship, the diver can then load the data to a computer, which evaluates the information and makes suggestions for possible repair measures. "For example, it can be decided whether the rust has corroded too deeply or if the defect in the pipe presents a serious problem or not," says Kühmstedt.