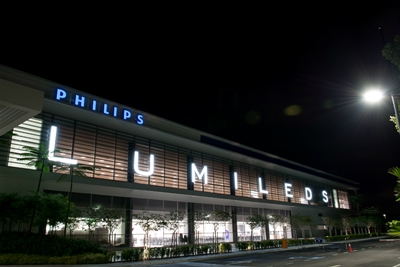 Philips has agreed to sell a majority stake in its LED components business Lumileds to the investment fund GO Scale Capital.

The fund, which is co-sponsored by Beijing-based GSR Ventures and the US venture group Oak Investment Partners, will buy 80 per cent of Philips’ combined LED components and automotive lighting business in a deal valuing the enterprise at approximately $3.3 billion. The business posted sales of around $2 billion in 2014, according to figures from Philips.

Pierre-Yves Lesaicherre, the current CEO of Lumileds, will remain in that position following closure of the deal, which is expected during the third quarter of the year assuming regulatory approval.

He will be joined in the Lumileds boardroom by GSR Ventures co-founder Sonny Wu, who will become interim chairman of the business following the transaction. In a statement from GO Scale, Wu said that the focus would be on investing for future growth as the LED lighting market continues to mature:

"The Lumileds acquisition will be a perfect example of how GO Scale turns cutting edge technologies into world class companies,” he claimed. “GO Scale Capital will focus on expanding Lumileds' opportunities by investing in its global centers of operation and in the fast-growing general lighting and automotive industries.”

GSR’s LED lighting portfolio
Wu’s GSR Ventures investment portfolio already includes a number of other LED chip and lighting companies – most of which are based in China. They include the Nanchang-based GaN-on-silicon chip maker Lattice Power and Beijing University of Technology spin-out TimesLED, as well as LED packaging firm ShineOn and lighting-focused SunSun.

GSR provided some of the financial muscle behind Lattice Power's $80 million venture round last year that was designed to boost both research and development efforts at the firm and its LED manufacturing capacity.

That strong Chinese influence may fuel speculation about where exactly Lumileds will make its LED chips in the longer term, but Wu indicated that the focus would be on exploiting GSR’s presence in the automotive market. For example, it has invested in Massachusetts-based Boston Power, which is working on lithium-ion batteries for electric vehicles.

“Through Lumileds' world-leading technology in key verticals such as LED chips, LED mobile flash and automotive lighting, together with a customer base including the likes of BMW, Volkswagen and Audi, we expect to see significant growth and unparalleled inroads into new opportunities such as electric vehicles,” Wu said.

According to Philips’ most recent financial update, sales of the combined Lumileds and automotive business units totalled just over €1.4 billion in 2014.

"Philips is very positive about this transaction with GO Scale Capital as its principals are long-term, growth-oriented investors with a track record of building and expanding technology companies.”

Lumileds evolution
While there had initially been some speculation that other LED manufacturing companies might be in line to acquire the Lumileds business, the emergence of a buyer from the world of private equity will not have come as a major surprise to those in the industry.

The GO Scale deal represents the latest stage in the evolution of the Lumileds business since it was set up as a joint venture between Philips Lighting and Agilent Technologies back in 1999. In 2005, when Agilent's semiconductor group was subject to its own private equity buy-out, Philips paid €765 million ($950 million at the time) to buy Agilent’s 47 per cent stake in the LED maker. Last year, Philips merged the unit with its own automotive lighting activity ahead of the planned sell-off.

Lumileds has been a major force in the LED business and a strong supplier into automotive applications throughout its existence. Expanding from an initial focus on red and orange emitters based on AlInGaP semiconductor structures, it soon moved into GaN-based blue emitters as that technology matured to the point where it could become useful in camera flash, general lighting and car headlamp applications.

As Van Houten added: "We have significantly improved the performance of the LED components business and optimized the industrial footprint in the automotive lighting business over the last few years, and established a strong management team and innovation pipeline. We are therefore convinced that together with GO Scale Capital, Lumileds can grow faster, attract more customers and increase scale as a stand-alone company.”

Challenges remain
Jamie Fox, principal analyst covering LED technologies at the consultancy company IHS, says that while Lumileds is undoubtedly a major player and has increased market share recently, it does face some challenges as the lighting industry moves increasingly into the digital era:

“While the overall packaged LED market grew [at a] single-digit [rate] in 2014, Lumileds saw double-digit [growth],” he told optics.org. “Lumileds increased its share of packaged LED revenue from 5 per cent in 2013 to 6 per cent in 2014 with growth in its key areas of lighting, automotive and consumer (including mobile camera flash).”

“Lumileds is one of the leading LED suppliers in terms of quality, IP and overall history and reputation,” Fox added. “However, LED companies operate in a very tough competitive environment with significant price erosion and it can sometimes be challenging to improve profit margin.”

With Philips having found a buyer for the Lumileds business, attention will switch to the planned split of its wider lighting business, which will leave the remainder of the company focused on healthcare and consumer technologies. The giant Dutch operation is also reported to be looking to sell its organic LED (OLED) division, better known as “Lumiblade”.

* update: In a research note released following the publication of this story, IHS analyst Jamie Fox reported that in 2014 Lumileds climbed to fourth spot among makers of packaged LEDs, overtaking Korea's Seoul Semiconductor as it posted revenues in excess of $1 billion.

The company ranked behind only Nichia, Samsung and Osram last year, with Fox adding: "By the fourth quarter last year, Lumileds had also overtaken Samsung, to place third in the quarterly rankings."