Retinal imaging company is set to be acquired by Nikon in a £260M cash deal. 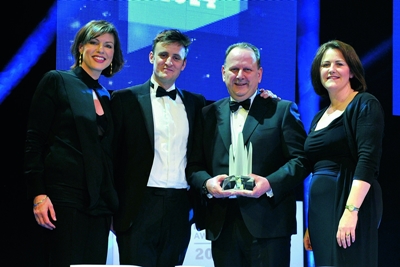 Optos won in the Financial Times-sponsored “Best Technology” category, and in response its CEO Roy Davis paid tribute to the company’s employees: “We have been on a journey for the past few years, utilising the latest design and manufacturing technology and software to build new products with the objective of making ‘optomap’ images a standard of care,” he said.

“In support of these new developments, we have also strengthened our clinical evidence to demonstrate the importance of imaging the entire retina and our commitment to helping eyecare professionals around the world save sight and lives. This award is a reflection of the hard work of all of our employees to that end.”

Nikon deal
In late February, Optos revealed that it was set to be acquired by Nikon, as part of the Japanese camera giant’s strategic move to expand its medical business unit.

The two companies have agreed an acquisition price of just under £260 million, which represented a 30 per cent premium on the Optos stock price just prior to the announcement.

The deal is set to be completed by the end of the second quarter of this year, and comes after Optos made an operating profit of around $16.3 million on sales of $170.6 million in its latest financial year.

In a statement detailing the deal, Nikon and Optos wrote that the proposed acquisition was an important step in the Japanese firm’s latest transformational strategic initiative – but also that it should result in the Optos technology becoming used in a wider range of diagnostic medical applications.

Nikon wants to expand into the medical sector, where it feels it can leverage wide-ranging optical expertise and know-how, including decades of experience in the development of cameras and semiconductor lithography tools.

“[The proposed acquisition] will combine Nikon's core competencies in optical technologies with Optos' imaging and diagnostics business,” said Nikon. “In addition, by leveraging Optos' expertise, Nikon will seek to expand into further medical areas such as internal diagnostics, ophthalmology treatment, and regenerative medicine (i.e. regeneration of the retina).”

Since 2007, Nikon has also been developing cell incubator and monitoring systems for live cells, and it is currently funding the development of a regenerative treatment for retinal diseases such as age-related macular degeneration (AMD). That is also seen as a beneficiary from the acquisition of Optos’ diagnostic platforms.

Incorporated in 1992 and based in Scotland, Optos has just under 400 employees. The technologies that it has in development include the “California” ultra-widefield imaging system for ophthalmology, which will be formally launched later this year.

It is similar to the company’s existing “Daytona” platform but also features fluorescein angiography (FA), used to evaluate the vasculature of the retina, and indocyanine green angiography (ICG). FA can detect diabetic retinopathy (neovascularization), vein occlusions, retinal artery occlusions, and tumors, while ICG is used to image the choroidal vasculature - important for the diagnosis, management and treatment of conditions including neovascular AMD.

Last year, the company also announced plans to develop a new laser-based system for early detection of sight-threatening diseases including glaucoma, diabetic retinopathy and AMD. The £1 million study involves collaboration with research groups at universities in Kent and Strathclyde.