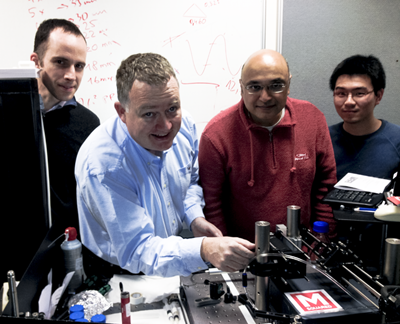 Scotland-based M Squared Lasers is partnering with the University of St Andrews to develop a new range of photonics and laser-based technologies designed to help in the detection and treatment of conditions such as cancer and Alzheimer’s disease.

Professor Kishan Dholakia at the University of St Andrews commented, “One key area we’ll be exploring is the use of Raman light-scattering which can be used in the fight against cancer by distinguishing between normal and unhealthy cells and tissue. In a similar way, Raman coupled with the use of fluorescence techniques, may be used in the area of authentication of high value liquors and spirits.

“More broadly we’ll be looking to unlock new information about how the human brain works. Through the use of advanced compact imaging platforms, which minimize damage through laser exposure, we hope to highlight cellular processes that could lead to an improved understanding of neural networks and conditions such as Alzheimer’s disease.

“While we’re becoming more adept at developing lasers with higher specifications and quality, we still need to continually improve the way we characterize their performance, which is another area of research included in this suite of licensed technology.”

The partners say the new deal is projected to bring “seven figure returns” to both the University of St Andrews and M Squared Lasers over the period of commercialization of the technologies. Both parties are now looking to engage with approaches for applications of biophotonics technology from other companies wordwide.

Dr Graeme Malcolm OBE, CEO of M Squared Lasers said, “This new partnership presents the opportunity to match our existing knowledge with relevant academic research, something which we hope will lead to significant developments for the health sector.

Professor Kishan Dholakia, added, “This is an exciting technology transfer opportunity for the University’s biophotonics portfolio and stems from many years of interaction between M Squared Lasers and several research professors in the School of Physics and Astronomy. My researcher colleagues and I are looking forward to working with M Squared Lasers to ensure that exciting new products will be developed.”

The Biophotonics Licence Agreement follows three other such commercialisation agreements between the University of St Andrews and M Squared Lasers. Last year, the University of St Andrew’s licensed its ultrafast laser and fast pulse autocorrelation patents and further assigned its patent family of multiple strands of IPR in the areas of mid-infrared optical parametric oscillator and terahertzz technologies, used in the company’s Firefly gas imaging and security product ranges.