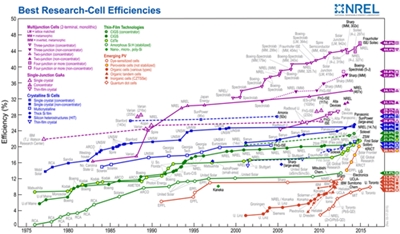 That’s according to the small Swedish company Sol Voltaics, which is claiming to have doubled the conversion efficiency of a small-scale cell based on the unusual solar material to 15.3 per cent, a development verified in tests at the Fraunhofer Institute for Solar Energy Research (ISE) in Freiburg, Germany.

GaAs has long been seen as a material that could be used to make solar cells much more efficient, but standard methods for depositing the III-V semiconductor have tended to require specialist equipment, making the approach prohibitively slow and expensive.

Where Sol Voltaics claims to be different is that its “Aerotaxy” deposition technique is much cheaper. According to the firm’s CEO Erik Smith, the approach allows production of a GaAs film capable of increasing the conversion efficiency of a silicon cell to more than 27 per cent when integrated in a tandem design – higher than the best silicon heterostructures or single-crystal designs (see NREL chart).

Control of surface states
The latest laboratory result suggests that Sol Voltaics has been able to refine the Aerotaxy technique sufficiently well to produce much more uniform films than before.

“Control of the high density of surface states of native GaAs is essential for PV applications, and these results prove that the company has resolved this challenge in the growth of solar cell nanowires,” stated the firm.

Instead of slowly depositing films layer-by-layer in a high-temperature oven to form a high-quality crystal, as is done in the more conventional process of epitaxy, Aerotaxy works by suspending the active materials in gases intermingled in a precisely controlled environment.

The suspended materials bond to form larger, uniform structures, and Sol Voltaics has previously likened the process to "growing nanowires in space". The firm says that this approach can generate nanowires within milliseconds, and produce them on a continuous basis at comparatively low temperatures.

Industrial scale
Back in 2013, Sol Voltaics received a SEK 41 million (approximately $6 million, at the time) loan from the Swedish Energy Agency to develop larger Aerotaxy equipment and to scale deposition and bonding techniques for industrial use.

Sol Voltaics told optics.org that it has now completed development of the larger Aerotaxy tool, which has been in operation since December 2014. But according to the Lund company’s director of business development Erik Olsson, there has been a subtle change to the Sol Voltaics business model.

Instead of selling the GaAs nanowires in the form of an ink (it had previously coined the term “Solink”), the plan is now to sell them already incorporated into a film.

“Our film is prepared for direct integration into our customer's solar panels,” Olsson told optics.org. “We have received huge traction from the market with our ability to dramatically boost the efficiency of solar panels.”

Olsson adds that Sol Voltaics has been able to develop close relationships with “several of the largest PV and material companies” for further development. And although the product is not yet available commercially, the company is further developing its “SolFilmT” per its customers' requests.

The change in approach does appear to have delayed the anticipated timescale of commercial introduction, however. In 2013, Sol Voltaics said that it expected the first commercial PV modules featuring Solink enhancement to appear this year. Olsson now says:

“With further enhancement of SolFilmT based on market demands we expect the product to be available to customers starting in 2017.”