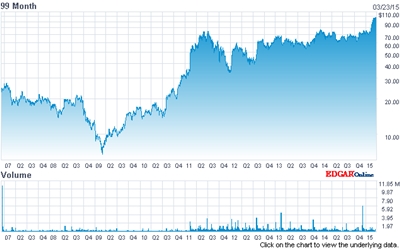 The stock price of IPG Photonics, the market leader in fiber lasers for industrial materials processing applications, has topped $100 for the first time.

At the close of trading on March 20, shares in the Nasdaq-listed firm were priced at exactly $100 – having spiked at $101.69 earlier in the day. It means that the company now boasts a market capitalization of around $5.25 billion, just over eight years since making its Nasdaq debut with an initial public offering (IPO) priced at $16.50 per share.

Investors who took advantage of that IPO price have enjoyed a 600 per cent in the value of their stake, following a particularly sharp upturn since the start of 2015. IPG’s stock price ended 2014 at just under $75, but made quick gains both before and after the company’s latest financial update on February 20.

During the quarterly results call with investors, the company’s founder, CEO, and major shareholder Valentin Gapontsev highlighted a surge in profits in 2014 as the company’s lasers found increasing use in the resurgent automotive sector, as well as the high-profile but still-emerging field of additive manufacturing.

Zinc-coated steel
As Gapontsev pointed out, there’s no sign of those markets becoming saturated any time soon, with plenty of new applications in the pipeline.

“The breadth of our applications is growing and our products continue to be evaluated for new applications,” the CEO said. “In the automotive industry we have made significant progress in developing a unique multi-laser beam process for welding and brazing hot zinc-coated steel. The application is generating excitement and interest from leading automotive manufacturers.”

Outside of the mainstream application area of cutting and welding, IPG has also just shipped two 50 kW lasers to NASA for a materials testing application – believed to be simulating atmospheric re-entry for the heat shield of the forthcoming Orion manned spacecraft.

Gapontsev told investors that he was expecting the overall market for fiber lasers to grow 13 per cent this year – outstripping wider laser market growth pegged at around 5 per cent by analysts – despite the negative effect of the strengthening US dollar.

Without those exchange rate “headwinds”, the true rate of growth of the fiber laser market could be as high as 18 per cent, he told investors. Last year, industrial fiber laser sales are believed to have grown 14 per cent, while IPG’s own sales to materials processing applications rose even faster, at 20 per cent.

Pivotal year
2014 also looks to have been a pivotal year, in that total industrial fiber laser sales are believed to have exceeded those of carbon dioxide sources for the first time. By the end of this year, there will be a significant gap as the fiber laser surge continues.

“Fiber laser sources are now the largest laser source in US dollar terms, largely based upon progress in macro, low- and mid-power infrared applications,” noted Gapontsev. “Within a few years, we expect that fiber laser sales will exceed the combined value of all other industrial laser sources, one of our target markets, with the continued generational switch to fiber lasers and the introduction of ultraviolet and ultrafast fiber lasers.”

The company’s high profit margins mean that in the eight years since its Nasdaq listing, IPG has generated a huge cash pile – despite large recent investment in its manufacturing facilities at various sites around the world. As of December 31, 2014, its balance sheet showed $522 million in cash and equivalents, offset by just $32.5 million in debts and credit lines.

Also speaking during last month’s results call, IPG’s CFO Tim Mammen pointed to a backlog of $325 million as 2014 came to a close, up significantly from $265 million a year earlier.

And responding to investor questioning about the use of that cash, he added that IPG was continuing to look at potential acquisitions that would strengthen the company’s position even further. “So at this point time, we are preserving our cash really for acquisition strategy,” he said.